ADAT can’t be connected to SPDIF

It’s just very odd to make two interfaces with unlabeled optical i/o and have them use incompatible protocol.

I think more people would want ADAT so they could do what @taylor was planning to do (connect it to some bank of normal preamps without setting up an aggregate device) than stream two channels of audio at 384Khz.

I agree. Maybe the code running the ES-9 is limited to 16 channels for some reason. With the 14 analog inputs and the 2 channels of SPDIF you’re at 16. With 8 analog outputs, 2 balanced mains, SPDIF and a headphone you’re at 14 channels of output with another 2 reserved for an ES-5. That’s 16 in and out. I’m currently using SPDIF to connect my UltraNova to my Focusrite and I was using the optical version to output audio from my old Mac. Apple dropped the digital I/O from all its newer models. I guess not many were using it (or probably even knew it was there). It used to be built into the headphone jack.

I was using the optical version to output audio from my old Mac. Apple dropped the digital I/O from all its newer models. I guess not many were using it (or probably even knew it was there). It used to be built into the headphone jack.

Wow, I’ve been a mac user forever but never knew about this!
Looks like my 2012 Macbook has the optical out, I’ll try this in the ES-9. Thanks for the tip!

I was disappointed that they decided to remove it. I used mine with an external DAC to drive my old audio setup. I run everything through my Focusrite and ES-8 now, so I don’t really miss it but it was nice to have a built in digital output.

Hello! I’m new. About to jump in to Audulus as a way of moving my eurorack sequencing into a computer (ipad). I have a question which I hope somebody would be kind enough to help me with: can I run Audulus into an es9 with an es5 expander and utilise 16 channels out of Audulus?

I have a feeling that I might have missed something in modifying the existing ES-8 module from the Reface Library. Perhaps @stschoen could weigh in here and let me know. Maybe it could be improved, given that it’s such an important aspect of Audulus. If you look inside you can see how easy it is to add ADC nodes (audio to digital converter) and DAC nodes (digital to audio converters). 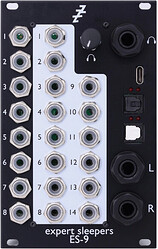 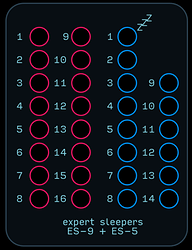 Just as an add, in addition to the module, you can use the individual ADC and DAC nodes if they’re more convenient. Audulus supports 16 channels of I/O so you should be fine with your setup. You’ll find quite a lot of information if you search the forum for ES-8. The modified module looks fine to me.

The only thing I am wondering is if the assignment of the outputs is in the wrong order. I have a hunch that the ES-5 becomes 9-16, in which caseI should modify the Audulus module to have 9-16 red outputs on the far left, rather that 1-8.

Post removed by author in order to avoid confusion.

For some random reason I just read this on muffwiggler:

“AFAIK Audulus doesn’t support the necessary encodings for the ES-5. However an ES-8 plus ES-3 would give you 16 outputs from Audulus no problem.”

It would be nice to get some clarification here…

After looking at the Expert Sleeper docs I believe that the comment was correct. I had assumed the ES-5 was an output channel expander but in fact it can only output gates, clock or MIDI. To do this, it uses a pair of output channels from the host module to create the signals. It requires special software to accomplish this so it would not work with Audulus. It works with Silent Way, Max/MSP and VCV rack only.

It doesn’t appear that the ES-5 will work with Audulus. In any case the ES-5’s outputs are not capable of audio or CV. They can only provide gates, clock or MIDI. The ES-9 provides 16 input and 16 output channels. The ES-9 has 14 analog inputs and 2 digital inputs and 12 analog outputs and 2 digital outputs. By default channels1-2 are the 1/4" main outputs, 1-2 and 3-4 mixed are the headphone outputs, 5-6 are the SPDIF out, and 9-16 are the 3.5mm output jacks. Channels 7-8 are intended for use with the ES-5 where each channel generates 3 of the 6 ES-5 outputs. The configuration utility can re-assign input and output channels and mixes to any of the physical I/O.

Yes, excuse me for causing confusion, es5 will only work with silent way to output various clock signals.

You’re pretty close to 16 out anyway. I forgot about the main and headphone outs. They do have a plug-in for VCV rack and also Max/MSP. In theory it might be possible to duplicate the MAX/MSP in Audulus but there doesn’t seem to be any info on how the ES-5 signals are encoded.

I am going to delete my earlier post with the ES-9+ES-5 module.

In theory it might be possible to duplicate the MAX/MSP in Audulus but there doesn’t seem to be any info on how the ES-5 signals are encoded.

As you can see that muffwiggler forum post I quoted above was written only a few days ago by os (“Oz”), the one-person-show behind expert sleepers. Audulus is an important piece of software for the ES-8 and ES-9, because of its multi-platform use. Audulus has also been recognized and extremely well reviewed. So, I think it is fairly crucial to have an ES-9 module posted or even pinned moving forward.

Does it seem reasonable that someone should join that muffwiggler thread in order to improve communication, with regard to the ES-5 encoding? From what I have seen, os is a very approachable person who would probably appreciate the clarity. Given all of the detail about the expert sleepers modules you shared above, as well as your expertise in interfacing, maybe it would be possible to figure out what the barrier is and see if it can be overcome.

It might be worth asking for the details. I don’t know how much interest there might be in the ES-5 and whether it would even be possible to use Audulus to generate the required waveforms. It would likely be CPU intensive. An ES-9 module might be a good idea in any case. Your’s was pretty close. It needs the main and headphone outputs added and the channel numbers reworked.
I might be able to reverse engineer the Max plug-in but I would have no way to test it.

Well, looking ahead, in terms of the ES-8, an “expansion header allows connection of an Expert Sleepers ES-5, to which in turn you can connect Expert Sleepers gate, CV and MIDI expanders.” So in order to use the ES-8 to pass MIDI out (supposing it were a feature in Audulus 4), I would need to have the ES-5 as well as the MIDI expander.

Whereas with the ES-9, it directly “provides a pair of MIDI sockets (via a breakout).”

Supposing I had an ES-9, just to simplify. It seems to me that in the world of Audulus, generating MIDI out of the one audio interface is important – especially if Audulus 4 becomes iPad only (since you can’t have two interfaces on iOS).

But, then, just passing MIDI back and fourth simply over USB seems like enough of a major improvement to fully utilize a number of midi controllers. (Driving the Digitakt with Audulus patches would probably be pretty fun!) Maybe the direct MIDI ports are not that key for everyone’s needs, even though the idea of controlling synths with those MIDI ports alone, in the Audulus world would be great for others.

While you’re limited to a single audio interface on iOS, it is possible to connect a midi device and an audio interface at the same by using a CCK and hub. The midi connection provided by the ES-5/ESX-8MD relies on software (part of Silent Way) to generate the Midi messages so it seems unlikely that it could be used with Audulus but the midi from the ES-9 is generated onboard so it should work with Audulus. I haven’t tried using more than one usb midi device with an iPad but I think it will work assuming you have an app like AUM to route the midi.