By not doing midi out, it means @taylor can skip a development cycle with Audulus 3 and release Audulus 4 by the holidays (hopefully). This is also why I am putting Know Your Nodes on Hiatus.

Yeah the whole MIDI thing can quickly become too much. But if you can technically send that much info down one cable, organize it and use it as control voltages, it opens up some avenues for modular prosthetics – which is a large part of what people use Audulus for.

@robertsyrett Audulus 4 will be some time next year. Everything takes longer than expected!

From looking at the user manual, it would appear that the Twister can control the LEDs internally. The biggest problem I’ve encountered as a result of no MIDI out support is the inability to sync external MIDI controllers with the Audulus knobs. Audulus knobs will track CC messages from an external controller reasonably well, but there’s no way to set an external controller’s initial state based on the current value of an Audulus knob. I’ve also found that Audulus needs to be in the foreground to properly process MIDI CC messages. I haven’t tested it using IAA or Audiobus, but that would also be something I would want to verify.

Don’t I know the feeling!

This sounds amazing! Just reposted it on our Audulus account

Taylor got one of these and hasn’t used it much yet, but I REALLY want one myself! I think it could be amazing with Audulus. I’m really excited for some more complex MIDI stuff in Audulus where hopefully we could also control the lights on the controller itself to give more feedback to it.

This is also why I am putting Know Your Nodes on Hiatus.

I was wondering why you’d suddenly stopped, but this makes sense! It will be easier for people to follow along if everything looks the same. I can’t yet share the stuff Taylor and I have been discussing about the design for Audulus 4, but the jump from 3 to 4 will be as big or MUCH bigger than the jump from 2 to 3 was in terms of what you can do, the visual style, processing, etc. And you’ll still be able to load your patches from 3 (phew).

Taylor got one of these and hasn’t used it much yet, but I REALLY want one myself!

Look, if I was an investor I would say that the DJ controller bubble burst about 3 or 4 years ago and modular is still coming strong. DJ TechTools has already moved enough units and is probably sitting on a bunch or has a killer ‘per-unit’ cost. Audulus and Midi-Fighter ought to team up for a post-Audulus 4 release, where maybe Audulus users would get a deal on the unit. Etc., etc., or whatever deal, branding, strategy, blah blah.

But this would hinge on whether or not the Twister is the ideal unit for Audulus 4. If you could address the issues that @stschoen has mentioned, it seems like it could be perfect. Can you borrow @taylor’s or maybe have TechTools send you one. I mean, you are heading into your fourth iteration of the software, you already successfully worked with Expert Sleepers…

TBH I think handing a unit like that to @stschoen would probably yield some serious conclusions about what is possible, what is worthwhile, etc.

One interesting thing is you can turn a knob, push a knob, or push and turn a knob. To make proper use of that, Audulus knobs would need to be thought in terms of multifunction encoders.

At the same time, for all of the functions, lights and feedback, it would be such a game changer to have digital text under each knob and at the top. Then you would be able to bring up a synth and see what is what. Makes me wonder though if getting in at this point and making it work well would be the right approach in terms of a next version of the Twister that does have digital text.

For now though, I’d like to know why @taylor doesn’t use his Midifighter Twister much at all?

For now though, I’d like to know why @taylor doesn’t use his Midifighter Twister much at all?

Hah from what he told me it’s just he hasn’t gotten around to it - he’s coding all the time and when he’s not, he’s playing with his Eurorack. I honestly have a Push 2 and haven’t been using it much lately mostly because I’ve been diving back into Eurorack.

Going back to the kick drum patch I made above in the video. I have been playing around with the idea of sampling as a way to remedy having a small rack. So if I patch a kick drum with my filter, I then just sample it and abandon that patch for another. Then I will have a kick sampled that I can use on the fly.

The Tip Top One can’t do this and the Bastl Granpa can’t do it either (to my knowledge). But the Disting MK4 can.

Can someone confirm this. Can you sample some drums and then use them on the fly? What are the drawbacks?

*** Mannequins /W ? but it seems so conceptual…

Last night I was diving into the spectrum analyzer on the Trace scope. Thought I would share this image. I found the graphics useful for visualizing filter resonance sweeps. 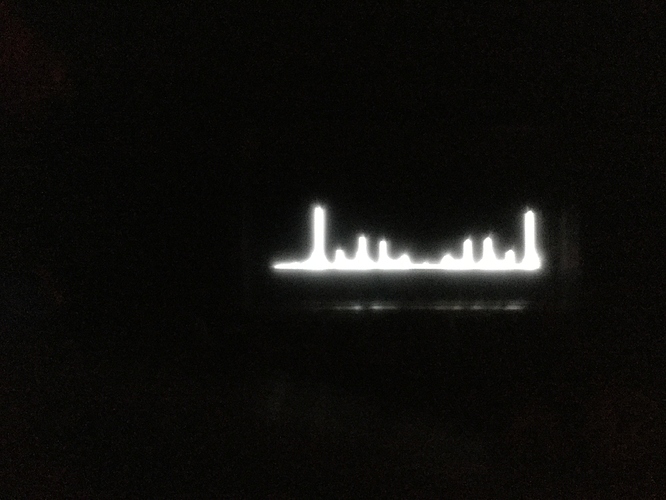 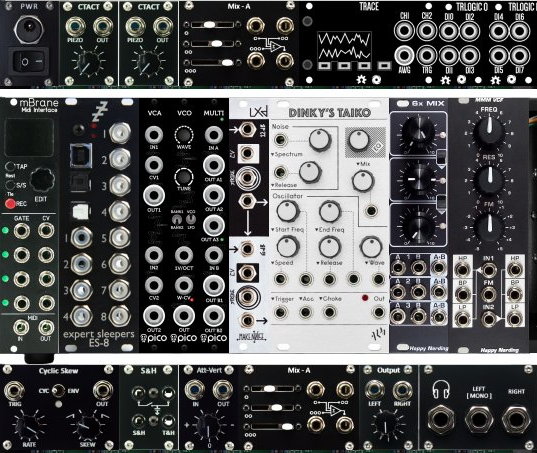 The Happy Nerding 6-Mix might be the last piece. Would have been nice to squeeze a Disting in there, as I like the idea of sampling while patching. I am not sure how I can sum all the voices and keep some stereo lines, without a 6hp mixer. I added an Att-Vert hoping I can find a way to duck for a kick.

Yeah, so the plan is to add another Mix-A as pictured and then the 6-mix. Anyone know a more elegant way to get everything sorted better?

I am going to take the advice here and get a used Analog 4 because it will allow me to add some effects that I don’t have room for. However, I am worried about trying to connect the A4 to mBrane. Will I be able to compose the modular with this setup (setting aside the 4 CV outs as they will obviously work). I already ordered mBrane. Pretty close to ordering the A4.

It looks like the Analog Four is happening. This creates a bit of a power struggle. It means I now have two 12v DC units to power off-grid.

Originally the plan was to run the Voltaic V88 (or something like it) to power the modular, iPad and guitar pedals.

This was all fine, but now with an elektron device I have to rethink it. Koma release this product recently: 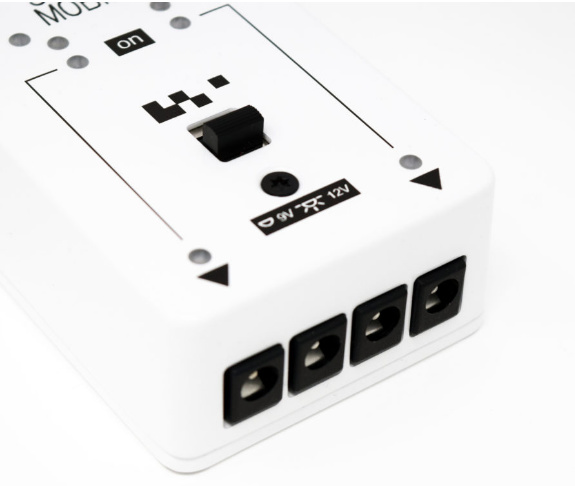 From what I gather this would solve the power struggle. If anyone has any advice or ideas, they are most welcome.

That looks pretty awesome! KOMA is a brand I have been long tempted by and this “portable power solution” looks like it was designed expressly for me!

I guess the solar charger would be sold separately?

Wow new logo. Here’s the thing. I could look for a battery pack that puts out 2 12v signals as well as a 5v for the ipad/usb stuff. It would probably cost less. However, with this option I can use the packs I already have – and if I need more power I can just grab another pack (this is also useful if there is a failure or loss of equipment, since I am not relying on one unit to power everything). Also, it addresses the issue of it being hard on battery banks to charge them while you use them – which would occur if I had one main power source. But by swapping out the smaller units as needed, there is no strain on the banks. Finally, it would enable me to power my guitar pedals as well which, right now, use 9v batteries when off-grid.

Yeah it’s a nice little nexus between battery and devices. I guess the only downside is you have to be mindful of which devices get 5 or 12V.

The devices getting 5v would be the ones using the second port on the battery pack itself (as they don’t need to be converted). Its safe.

I am on the fence about whether I should share what I am finding as it may be obvious to everyone. Oh well, here goes:

There have been some accidental happy surprises with the rack so far. For one, I have a stereo filter. I also have two Pulp Logic CTACT’s (which were meant for integrating acoustic instruments). However, not only are the CTACT’s good for gain staging, when you have two you then have some amplitude attenuation for the stereo lines. This is really effective for dialling in a stereo field. If you take the LP output from the multimode filter on one side, and the BP output from the other side, then tweak things from the CTACT’s, you get a really interesting full body sound, which is a nice alternative to the common mono basslines. 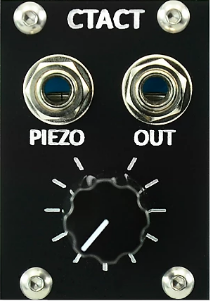 I really like the morphing trick in the video here

I think I would like to participate more in my oscillator. So I have a PICO VCO that has a bank of waves and I can ‘morph’ between the waves with cv. However, Audulus has so many tools that it would be nice to build up my own waves. Anyone know some of the best ways to start personalize a waveform bank for Audulus? How far did @jjthrash’s stuff go?

@futureaztec The current code will take a single-cycle waveform (via a WAV file) and build an anti-aliased bank of splines. They sound pretty great, but they are somewhat CPU intensive.

As part of that work I took AdventureKid’s library of single-cycle waveforms and turned them into individual Audulus patches: