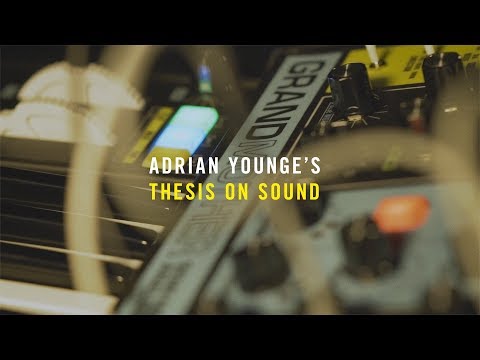 I know this is a divisive synth, but I think it’s amazing. The colors are stunning.

This is the first Moog I’ve wanted to own, honestly. The sound of the Subphatty and Voyager and even Minimoog is obviously awesome, and the Moog Mother is great with its patchbay on the side and controls free of spaghetti, but this is just too delicious.

I love the font, I love the old Radioshack feel, it’s just everything for me. I’m one of those people who cares deeply about the aesthetics of an instrument. A beautiful instrument is an enticing instrument that you’ll want to play and explore. Some people may call this toy-like, but what’s wrong with toys? Toys bring out our imagination, and I expect this to do the same.

Really? What do people have against moog finally making the legacy modular designs available in a colorful little package?

I love the attention to detail, and the overall approach. Plus spring reverb! If this were available a few years ago I almost certainly would have bought it.

The only thing I have against it is I don’t need it but still want it!

Also, the circuitry inside is anything but toy-like. It has the same core as the modular replicas they have made recently. That means filter-based exponentially curved adsr and cp3 mixers with asymmetric clipping, and a million other little touches that make this more vintage than even the model D reissue! Honestly, if I weren’t already drowning in eurorack this would be a must buy.

Think, you could use this synth to add spring reverb to your Audulus patch, or use Audulus to make it polyphonic. It’s a remarkably flexible design without any drudgery of editting everything in a 2-line lcd display like the sub 37.

Yeah lots of people on FB at least are hating on the look. They’re also saying Moog isn’t innovating which I can kinda understand, but I think they’re not just coasting on old designs - they’re using them to set the stage for some more innovative stuff to come.

I kind of think you can’t satisfy everybody. Make a new synth and it doesn’t sound like the old, make a legacy synth and it isn’t innovative. I don’t think there is anything else like the DFAM is there? This is also effectively a $900 minimoog modular. It has full midi control from the DAW and a super rugged case. The only other synth I can think of with a similar feature set is the SEM PRO, which costs twice as much.

I don’t think there is anything else like the DFAM is there?

Exactly. Moog IS innovating. They are relying on the ladder filter as the core of their sound, but still - what happens at Moog benefits all synth companies everywhere (especially Behringer lol).

And yeah, I think the only difference is the old Minimoogs were discrete components hand soldered, whereas this one is same stuff with more features plus modular in a SMT package. Makes sense now why they’d discontinue the Minimoog. The factory’s only so big (and it’s not very big!) so you can only make so many things at once.

I love the design too. It is a little bit modern, a little bit dated. Wouldn’t it be so expensive, it would be one ideal beginner synthesizer due to the clear structure. Especially for the entry into modular. Maybe, some day, I will have learned enough about synthesizers and playing keyboard to justify buying such thing. For now, I am happy with iPad apps.

It’s the kind of thing I would enjoy learning on, the euro rack is attractive but very intimidating and hard to grasp for a noob…

It reminds me to Moog MG1

Really like the look of the synth and the sound… it really captures that very early moog modular sounds with very beautiful pure tones, that instantly remind me of Mort Garson’s Plantasia and others from that super early moog era. I keep going back and forth on if I should get it but I think I might have to, plantasia and the early stuff is what got me into making synth music after all. https://youtu.be/Hc0jUlnRmsU this is a good example of that tone that seems so impossible to capture perfectly elsewhere.

Almost makes me want to give up my Source…

I love the color scheme of that synth, but the single knob is a bit scary.

if you put the URL on it’s own line, the video will show up in the forum thread without having to open a new tab.

I’ve never bought modular hardware before, but this thing is mightily tempting me. It looks like just exactly the right level of performance tweaky knobs and patchy euro goodness.