Internal Gain-Staging (After the ADC)

I am needing to make some plans for my modular lunchbox. Space is tight. When I bought it I was under the impression that the Pulp Logic C-Tact modules would provide enough gain staging to plug a guitar into, then arrive at eurorack levels. I have found that the C-Tact does express an audible signal, but it seems to cut the tail off the sound – as though it has some sort of noise floor. There are many options for a preamp, such as the Joranalogue Recieve, the Bastl Hendrikson, or the ALM S.B.G., etc. If I have to get hardware I would prefer to have a Pulplogic format 1U tile, but I am not seeing anything much.

However, is it at all possible to detect the signal enough directly into the ES-8 and then do the gain staging inside Audulus? I imagine not, but I thought I should check.

It’s pretty unlikely that you’ll get a decent sound running a guitar directly into the ES-8. Since the ES-8 is designed for signals in the range of +/- 10volts, even a line-level signal isn’t really high enough to be optimal. That being said, it certainly wouldn’t hurt to give it a try. I also found this. Although it’s not 1U, it looks pretty flexible and will support both mikes and hi-Z guitar pickups. 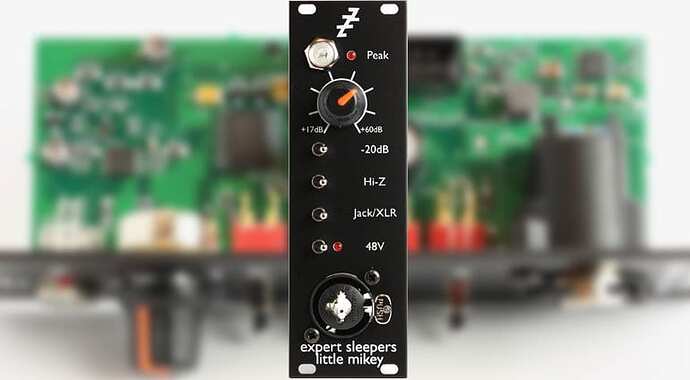 Expert Sleepers Little Mikey: plug your mic and guitar into your little...

Little Mikey will bring your voice, instrument or guitars into your Eurorack for whatever weird and twisted moments of deep and modulated sound design you can think of.


I also found a 1U device from Itelligel. Note that it requires a separate 1U jack module to provide the I/O

Thanks for the information. I was less attracted to the Little Mikey because it takes up 8hp. Being 8hp and only having one input, without some of the ‘external-guitar-pedal-as-effect’ functions which are present in the other modules makes it not quite right for me. In that it’s designed to give phantom power to a mic, it leans more toward other uses. 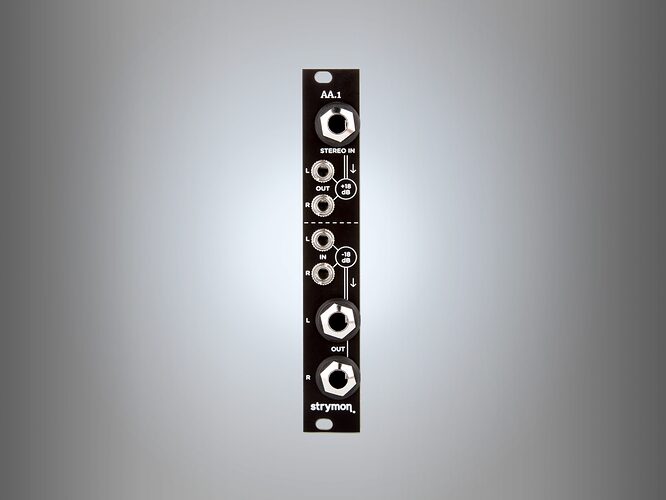 AA.1 is purpose built to combine your guitar gear, effects pedals, and Eurorack modules in just about any way you can imagine.

4hp with not only staging in but also staging out. Handy. I think that one of the cool things with eurorack is the agonizing. There are at least 10 modules that could be candidates. The ALM S.B.G. has “regulation/conditioning of CV modulation signals intended for pedal expression inputs.” Each one has some extra whistle or two. With the Joranalogue Receive I could process two instruments or take a stereo signal from, say, an outboard mixer.

The issue with the intellijel 1U is that it is not compatible with the Pulplogic 1U format.

I looked at the ALM unit and it doesn’t actually mention connecting a guitar, only an effects pedal. The specs don’t mention the input impedance but it would be a good idea to test it out if possible. Are you using an electric guitar with a typical magnetic pickup?
My son has several Strymon pedals and is very satisfied with them. Definitely high quality gear.
I’m not too familiar with the 1U format. I wasn’t aware there were differences.

it would be a good idea to test it out if possible.

I live in a very remote area.

Are you using an electric guitar with a typical magnetic pickup?

I have four instruments to worry about. But I also have a Behringer QX1002USB mixer with 2 preamps on it.

It’s a mix and match challenge, each instrument with it’s own limitations. I find with this stuff it must be like working with differential equations – having to hold several approaches in one’s head at once.

I have even been considering the 1010 Bluebox. 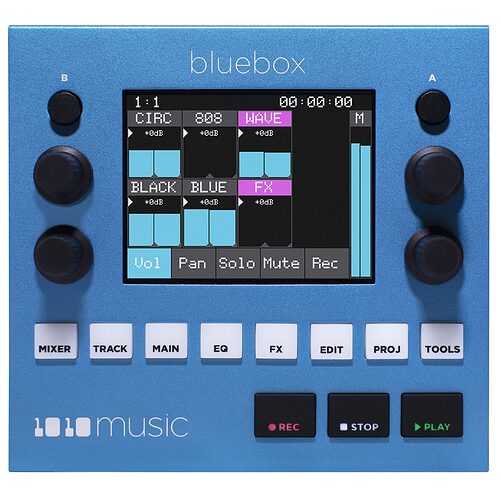 Bluebox is the portable digital audio mixer that integrates your electronic music gear.  Connect your eurorack, sampler, drum machine and synthesizer outputs to 6 stereo, 3.5 mm TRS inputs and map them to 12 mono tracks or 6 stereo tracks – all...

It can deal with line level and eurorack inputs at once. However, it isn’t able to run as an audio interface. My ES-8 has 4 inputs. My thought there originally was to justify the price of the ES-8 by using it as my audio interface. I have thought about selling it to get the ES-9 with 14 audio inputs. At the same time, still puts me at the issue of having to do preamping and line-level to euro gain staging.

I am not totally stuck on needing to accommodate all four instruments at once. Although, when I was looping with Audulus, I would hook up the acoustic guitar and bass as well as the ukulele to the Behringer outboard mixer, then hook that up to an Apogee Jam, to an iPhone, then Audulus. I would just grab one instrument, then another, trying to ‘perform a track’. Thanks for your help with that Clocked Looper, I love it!

It’s such a damn differential equation though because the Digitakt is an audio interface and so is the ES-8. So I can’t do that into an iPad (2 audio interfaces at once) even it was a faster newer one. (I could run them into my late 2011 Macbook). I just wanted to avoid that because I kind of want to run my Native Instruments Traktor Kontrol Z1 on the Macbook (another ‘audio interface’ device). This would mean I could be DJing my finished tracks (synced) on the one side, but then have a full live performace rig on the other side.

Sorry for all the detail, but I have been working on/dreaming about this for years (on a tight budget).

I should say, I am also trying to have less boxes, devices and wires. What I like about Audulus is that I just fall into making, rather than getting interrupted by playing ‘sound tech troubleshooter’.

It’s so easy to spend hours and hours looking at this stuff. Geeze. I think I just found the right thing though.

I like that it has two separate preamps, 1/4" and 1/8" inputs, gain attenuation knobs and it’s 4hp. Might pull the trigger as I found a very discounted model. Any thoughts?

Looks like it might be a good fit. I can sympathize with your dilemma. My Focusrite interface is currently at capacity (6 inputs). If I want to connect a guitar, bass or other instruments I have to unhook one of the synths then screw with all the gains etc. I can use the ES-8 to get another 4 input channels but even with the Behringer synths running wide open I have to raise the gain quite a bit in Live if I run them through the ES-8. Additionally the Focusrite has a nice stand-alone mixer which allows me to fool around without having to load up a DAW. Focusrite has already indicated that they don’t intend to update the software since my model is “obsolete” so I expect I’ll have to replace it when the software will no longer work. Since the software controls all of the switching and routing it won’t be very useable without the app.
I’ve thought about a mixer but while it would be good for live situations, I really prefer to have a separate track for each input when recording. Don’t know what I’ll end up doing. Probably wait until I’m forced to get something new.

This got me thinking about the Scarlett Octopre via ADAT to the ES-8.

Would those show up as 8 additional input channels viz., 5-14 in Audulus? Obviously they wouldn’t be DC coupled like inputs 1-4, but it would make for 8 extra preamped AC coupled channels, right?

That’s an interesting idea. It would give you 8 additional mic/line/instrument inputs for the ES-8 plus you would have 8 analog line level outputs from the preamps which might be useful with your rack.

The Octopre dynamic model allows you to tie the outputs to the ADAT so you could add some additional outputs as well as getting the built in compression.

As a result of our conversation, I decided to take another look at using the ES-8 as a set of additional audio I/O channels in an aggregate device on my iMac. I found that I needed to boost line level signals by about 12 dB to compensate for the reduced sensitivity of the ES-8. This is manageable for line level signals but you would need a lot more gain for something like a guitar. In general the sound seemed to be fine with no noticeable noise. I did find that at the higher gain the slight DC offset from the ES-8, even with no input signal, did produce a noticeable signal in Live which by default has no DC filtering on inputs. I was able to remove this by using the Live Utility plug-in which has a DC filter. In situations where you are processing audio with the ES-8 it might be a good idea to use some kind of high pass filter to remove any subsonics. There doesn’t appear to be any way to adjust the ES-8 output to remove the offset. It’s very small and only shows up due to the high gain required to deal with a regular line-level signal. Given the drift of analog circuits as they age and as temperature fluctuates it’s probably inevitable that the output won’t be exactly zero.
Given my results with the synths, I didn’t bother with the guitar. I suspect that you would need so much gain to make the signal useable that it wouldn’t be practical.