Audulus files from the community appear as text files. When I save these to the Files partition on my iPad, and then try to open them from within Audulus, they only appear grayed-out and remain inaccessible.

How do I get around this (probably very simple) problem??

Instead of downloading the file when it asks you, hit “view”, then use share and scroll down to bottom, “save file”.

I know this cannot be this complicated, but what am I missing?

Sorry — Download File is what you need, not Save File. 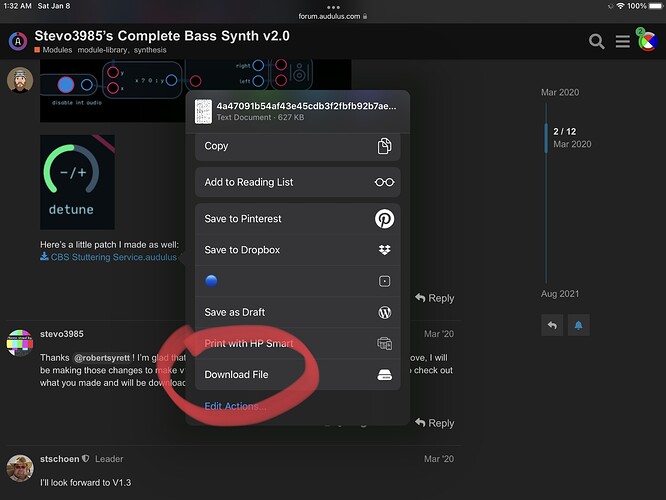 Hey thanks for sticking with me, Jersmil. I have iOS 14.7.1, but it works basically the same way. Nevertheless all this does is download the text file. I can’t figure out how to actually open the file in Audulus. The OS wants to treat it as something to be read, not a program to execute.

Is there a way to get Audulus itself to actually open a saved Audulus program and execute it as an Audulus program?? There should be. But I cannot figure it out. Seems like this is something that should be VERY easy. Literally ALL other programs throughout the entire universe of computer programs are able to easily open files created in those programs.

The fundamental issue is the way the software used on the forum describes the downloaded file. Safari isn’t sure exactly what type of file is being downloaded so for security reasons it treats the file as text and adds a hidden .txt extension. Unfortunately there’s no easy way to edit the file name on iOS using native apps. I did find the following but haven’t tried it: Show and change file extension on iPhone iPad – iOS App Weekly If you attempt to download the file in Chrome it will simply open as text for the same reason.
This has been an ongoing issue and previously the workaround was to use an Apple app called Shortcuts to download the file as described here: How to Download Audulus Patches on iOS Unfortunately I just checked on my iPad and there seems to bet an issue with the script on iOS 15. I get an error message about an invalid URL. I normally use my Mac which doesn’t have an issue. I’ll do some digging when I get a chance

//The fundamental issue is the way the software used on the forum describes the downloaded file. Safari isn’t sure exactly what type of file is being downloaded so for security reasons it treats the file as text and adds a hidden .txt extension. …//

Thanks, Stschoen. I will continue to work on this too. I will report any meaningful solutions.

I have to say, however, that this is a problem that SHOULD have been worked out by Audulus from the beginning. I mean, being able to transfer and open its own files is about as rudimentary a function as anything. I am kind of surprised that this problem persists, given the volume of activity on this site among Audulus users. This makes me think that there MUST be an obvious solution that I am somehow overlooking.

OK I had a chance to do some digging and discovered that the download file shortcut has been updated for iOS 15. If you haven’t already, install the shortcuts app from Apple. Open the app and select gallery on the left. Search for Download File. Add the shortcut.

Now in Safari long press on the link to the Audulus file you wish to download. Select Share. You should then have a Download File option in the Share sheet. Select Download File. You’ll get a dialog asking for permission and then one to specify the location for the file. Choose an appropriate location. Once the file has been downloaded you should be able to open it in Audulus. The Download File shortcut doesn’t append the .txt extension to the file so Audulus recognizes it as a valid file.

Just to be clear, this isn’t actually an Audulus problem. It’s the result of the way the Forum software (Discourse) and the iOS version of the Safari web browser treat files with unrecognized file extensions. Since the .audulus extension is not recognized and there is no defined MIME type for Audulus files, Safari makes a guess as to the file type and since Audulus 3 files are actually just specialized text files, Safari treats them as such. It might be possible to use another vendor’s software to host the Forum but Discourse is an excellent choice in most respects. Bear in mind that this problem did not exist when the Forum was originally set up. It occurred as a result of changes to the iOS version of Safari quite some time ago. Taylor has had several discussions with the Discourse developers to investigate potential solutions but without success. The macOS version of Safari also had this problem on some earlier versions of macOS, but this behaviour has changed in the last couple of macOS releases and it is now no longer necessary to rename the file. Just as a point of interest the file format for Audulus version 4 has changed and based on some initial testing version 4 files work fine.

solutions but without success.

Got it, thanks. So based on what you said, I found a simple solution. I simply download the file and then rename it, replacing the “.txt” extension with the “.audulus” extension. Then it opens from Audulus just fine.

Thanks for the hint. That solved the problem!

Btw, I have never used Shortcuts, the “Download File” option was already in my Share menu on iOS 15. (Possibly added by some other app?) Prior to this little discovery, view → share → download file worked fine for me.

I think Shortcuts may be installed by default now

This has been an ongoing issue and previously the workaround was to use an Apple app called Shortcuts to download the file as described here: How to Download Audulus Patches on iOS Unfortunately I just checked on my iPad and there seems to bet an issue with the script on iOS 15. I get an error message about an invalid URL. I normally use my Mac which doesn’t have an issue. I’ll do some digging when I get a chance

Is my solution that you pinned last year no longer valid?

!!! 2020/12/02 TESTED FIX HERE !!! For anyone having trouble with (the infuriating issue of) .txt being appended to iOS module/patch files from the forum: If you follow the link at the bottom of this post, you can download the script (which I just tested again to take the displayed screenshots included for anyone who prefers visual instructions) into Shortcuts. Once you have the Shortcuts script, it should appear by default in your Safari Share Menu options (I can only vouch for Safari, as I don…

It looks like they changed the script slightly. I was getting an error message when I ran the original script on iOS 15. I deleted Shortcuts and re-installed it and noticed the new “Download File” script had some minor changes. BTW it looks like Shortcuts is now installed by default.

Dang, sure glad I put in all that effort only for Apple to negate all my hard work

I suppose it’s better for the community this way, though.

On my iPad I can download audulus files with firefox without any issue. iOS 15.2.

Good info, in case we have more trouble while I re-write the download automation in Shortcuts (again)