How’s this? I set the note range from 35 to 81 per the general MIDI specs for Drums and the MIDI channel to 10.

I got around to testing it out and I think this is nearly perfect!

The only suggestion I would make would be to add lights to the output to better track which outputs are active. Also I ran out of CPU around 5 drum voices, so I think a 4 channel version might reflect the practical limit.

Lights are no problem. I can certainly do a 4 channel version. I’ll look over the logic and make sure I haven’t accidentally left something poly that shouldn’t be.

I was surprised that you had CPU issues until I loaded this on my iPad Air 2 and discovered almost 20% CPU. I get spoiled on my Mac. I reworked the logic and managed to get it down to around 5%. I still added a 4 channel version. I moved the post to the Modules category here:

[14%20AM] General MIDI Drum Trigger with Velocity These are an 8 and 4 channel polyphonic drum trigger that outputs a velocity sensitive gate for each channel when the assigned MIDI note is received. It adopts the general MID standard for percussion so it’s preset to MIDI channel 10 and the note range is from 35 to 81. Each of the channels can bet set to any of the available notes. The MIDI channel and note range can easily be altered by editing the module. I/O Input Notes Input is vi…

[28%20PM] Polyphonic MIDI Trigger One of the drawbacks of using a Trigger node for MIDI control of percussion is the lack of any velocity information. Additionally Trigger nodes are not channel specific and can conflict with other MIDI information. I came up with this solution. It takes a base MIDI note number as input (60 is middle C). It will output a gate on each output for the major scale starting at the base note, but this can be changed for any arbitrary MIDI note. It’s currently set for …

I was messing around a little while ago while taking a break from packing up my apartment for the movers coming Friday. I used @futureaztec addition of my Stagger Effect patch, and routed the output of Dublin Gadget our through this patch in AudioBus3, it sounds SOOOOO good. Check it out, see what you think of the effect with the other gadgets. I have been doing all this MIDI routing lately, I completely forgot that there is still the capacity to simply run audio through A3 effects

The dublin gadget is one of my favorites! I will have to try that out.

I am trying two things using the two device method above. I got stuck in the middle of a creative flow and had to stop.

I am trying to send 16th notes out of Taipei but it just shows up as one long gate in the General MIDI module. I imagine this is a setting in Gadget type problem.

Indeed, you need to shorten the length of each note otherwise it becomes just one continuous high gate. You can either shorten each note manually, shorten one bar then copy paste, or use a 32nd note grid and use every note.

Within Gagget, using advanced midi I was trying to send the notes out of Taipei on channel X, hoping to set the midi input channel x on a drum synth. I thought this might be a workaround to get Taipei to fire any other gadget module, but I have had no luck. Then I though it all else fails, maybe I can send MIDI out and then back into Gadget.

Can’t you duplicate the taipei track and then change the gadget type? This works for me.

in both answers you went over things I had thought of. Of course the reason why the gate stays high has to do with the gate length in Gadget. I just didn’t see a way to shade the gate a little so I didn’t have to

shorten each note manually, shorten one bar then copy paste, or use a 32nd note grid and use every note.

You asked why couldn’t I just

duplicate the taipei track and then change the gadget type?

The first problem I’d really like to solve. The second one I imagine I’ll just have live with because if they need a special module to send midi out, the existing Gadgets probably can’t send midi between track channels.

@futureaztec it is possible that I am missing something important about what you are trying to do, but if I am not misunderstanding when you say:

Do you happen to have a MIDI pad controller that can be connected to Gadget? My BT4.0 Korg NanoKey Studio works great for this purpose, where I am using the pads of the controller to control Taipei, and that allows me to send drum beats to my hardware via NanoKey via Taipei without having to use the piano keys. Could this work for you too?

Do you happen to have a MIDI pad controller that can be connected to Gadget?

No, not the drum machine sequencer kind.

My BT4.0 Korg NanoKey Studio works great for this purpose

Yeah that would be fun.

Arturia Beatstep dropped recently below $100 and has MIDI DIN, USB, and CV out capability

although the option of

NanoKey Studio being a Bluetooth controller with drum pads, keys, knobs, buttons, built in arp, chord and scale memory makes this a strong match also for just under $130, where it used to be almost $200 iirc

which is ultimately why I bought it to go with Gadget and Audulus on my iPad. I dunno what your price range is or if you would rather find a workaround, but I figured it might be helpful to point out the two best candidates (IMO) that I have found lately (one of which I happily own and the other I kinda wish I had cuz of the CV and MIDI DIN). 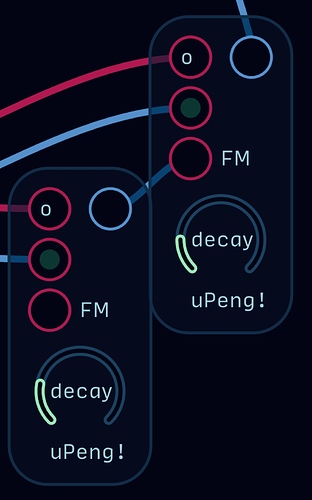 Two device method: iPad with Gadget and iPhone with Audulus through mixer hooked up to iPad and ADC’d internally into AUM. Compressor pedal and fuzz pedal on the sends.