Hey, does anybody have the same problem ?

i’m using Audulus 3.5.2 and just
re-installed the last AU version from the website, but it doesn’t seem to work
i have to force quit Ableton everytime after trying to load an instance

This is a known bug ATM, unfortunately it is likely to stay that way until the forthcoming plugin overhaul. It works a little better in Logic if you have that. I have been loading patches to my iPad and using it like a plug out synth.

Hey @Nomak. I’m on later versions of OS/DAW and as @robertsyrett notes there are known issues with the interactions between Ableton and the AU. I’m currently using the ‘external instrument’ device to target the desktop version and grabbing that audio with soundflower.

That’s a good trick thanks !
and what about ‘external audio effect’ for the effect version ?

I had a crack at it and this is what I came up with: Route your system audio through soundflower as usual and for the track that you want to effect, just push the source audio to the system through the left channel only. You can route the right channel from Audulus (system) to get the effected audio back in your DAW.

The attached patch will take the audio and effect it according to whatever effect you replace my default with. It will then pass the audio back through the right audio channel.

I’m still getting to know my nodes so there are likely to be some quirks… as the usual precaution the attached patch has the volume for the return and the amount of wet signal turned down - just turn those up as you like - the waveform and meter output will compare the before and after so you can match your levels.

I think you might want to check the outputs on the two stacked modules. It looks like one of them isn’t hooked up to anything.

Thanks. Good catch! Updated below. I didn’t really need that output because the top metering is just to display the waveform/levels for the effected signal. This solution does definitely target a specific use case where you want to use the macOS desktop version and to have a DAW both send source audio to Audulus and receive effected audio back from Audulus in real time. This also allows for ‘playability’ of the effect using a controller or automation data from the DAW to modulate controls within the patch. 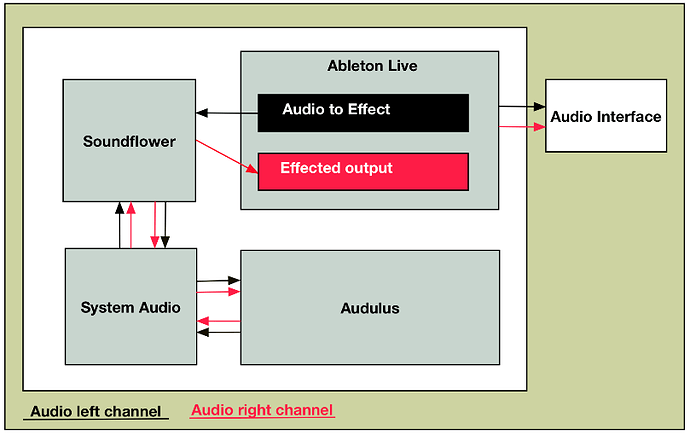 Is everything fixed in High Sierra ?

Sorry I’m just getting to this now - can you send crash reports you get from Ableton to support@audulus.com so we can see what’s going on? I don’t think either Taylor or I have Live 10.

I just talked to Taylor about this an unfortunately it’s not something that we can solve until we release our AUv3 for Mac. We’re still working on our AUv3 for iOS, and once that’s released, we’ll switch to working on the Mac version.

It has to do with something that Live switched on their end. If you have a copy of Live 9, it will still work there. I know it’s not an ideal workaround but if you’re determined to use it, you can either just use Live 9 for your Audulus tracks (and import them into 10 when you’re done recording with Audulus) or use the standalone and pipe the audio into Live using Soundflower.

I’m running macOS Mojave 10.14.3 and Live V10.0.5 and the Audulus AU runs, but occasionally crashes Live, particularly when I’m running multiple instances. I have one Live set with several Audulus AUs that will crash Live every time you try to close the set, but it runs until you try to close it. I have used the Soundflower approach and it works but does introduce additional latency

Its not a big deal as I am presently doing all my stuff in single takes, no daw arranging. I was just enjoying doing some Ableton fiddling on the couch and wasn’t able to incorporate Audulus as a plugin. It works very well in standalone on the iPad.

Audulus is my fave modular software for lots of reasons

I used to patch on the go on my phone and had no excuses not to be full time creative.

Now something is missing in my workflow and that’s really frustrating.

The AU is scheduled for a major update when Audulus 4 is released. It will be a version 3 AU and should have lots of new functionality. Even so, I have been able to use the current AU successfully in Ableton Suite 10.0.5. I have run across occasional issues but nothing serious enough to prevent me from using the AU. This was produced using a 15 track live set with 5 Audulus AUs, 6 Ableton instruments and a Novation UltraNova all running simultaneously (no flattened tracks). All the melodic lines except the piano start as Audulus AUs and crossfade to Ableton sampled instruments.