An Uncertain Future A4 Refresh 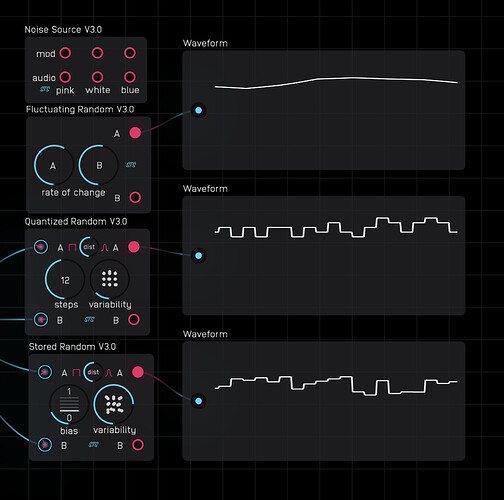 A4 An Uncertain Future

This is an A4 update to my previous A3 set of modules.
After listening to a podcast posted by @futureaztec on the Buchla 266e Source of Uncertainty module, I thought I would build something in a similar vein. Like the original, it’s divided into four sections. I configured them as individual modules rather than a single unit so it would be possible to use only the ones you need.

The first module is a noise source with pink, white and blue noise. It has separate outputs scaled and offset for either audio or modulation use. Since pink noise contains substantial sub-sonic energy, the pink noise audio output also has a DC Blocker in series. If you use the pink noise mod output for audio it’s advisable to filter frequencies below 20 Hz to prevent possible speaker damage.

The second module is a source of smoothly changing random modulation with a variable rate of change. It has two independent channels of output, each with its own rate control.

The third module outputs a clocked sequence of stepped random modulation with control over the number of steps from 2 to 24, the distribution of values from flat to bell curve, and how correlated each value is to the previous value. A low variability value means each value will be close to the previous one. A new value is produced at each channel’s output for each trigger applied to each channel’s input.

The last module is essentially a randomized sample and hold. The value of the bias knob is read at each clock and the resulting value is randomly modified. The amount of randomness (variability) and its distribution (dist) can be adjusted. It also has two independent channels.

I love the name of this suite of modules.