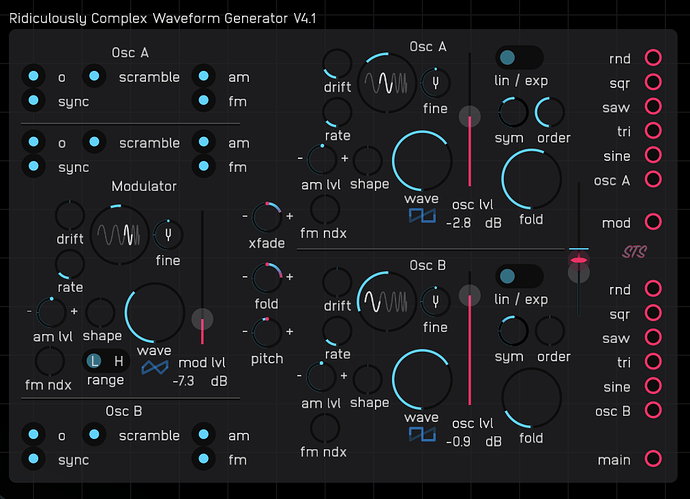 This was inspired by Softube Modular’s virtual recreation of the Buchla 259e Twisted Waveform Generator. The original 259e hardware was a digital version of the all analog Buchla 259 Complex Waveform Generator and was wavetable based. Since Audulus 3 didn’t lend itself well to wavetable synthesis, I decided to take a blended approach. This is not an attempt to clone either Buchla unit, but a complex oscillator in the same general style. With the introduction of Audulus version 4, wavetable synthesis is now much more practical, but that’s a project for another day.

The unit consists of a modulating oscillator and a pair of primary oscillators. Each oscillator is basically of the same design. The oscillators feature a selectable waveform that crossfades between sine, triangle, saw, square and random waves. The saw and square wave also have a shape control which in the case of the saw introduces a second saw peak and in the case of the square wave varies the pulse width. Each oscillator has a frequency and fine tune control and an output level slider. There is an external amplitude modulation input for each that can be set to linear or exponential response for the primary oscillators and is adjusted by an attenuverter. The oscillator output level is a combination of the AM input level and the oscillator lvl control allowing for external level control if desired. There is a linear FM input with a level control (ndx) and a sync input for each oscillator. There are drift level and rate controls which cause the oscillators to vary in frequency over time similar to an analog oscillator.

The random wave is a random set of 16 steps which is used to create an audio output. A new set of steps can be generated by a pulse on the scramble input for each oscillator.

I am new to A4 and modular synthesis, but even I can appreciate your skill and experience at producing both the Waveform generator and and the demo example, which contains several other interesting custom modules.

Thanks so much for sharing

@stschoen is one of the great Audulus designers! He’s come up with so many great ideas I’ve lost count. Great person to learn from.

Since Audulus doesn’t lend itself well to wavetable synthesis

Can the memory node be repurposed for wavetables?

Yeah the memory node is perfect for doing wavetable stuff. I should edit that line.