A4 Ding - A Bell Simulator 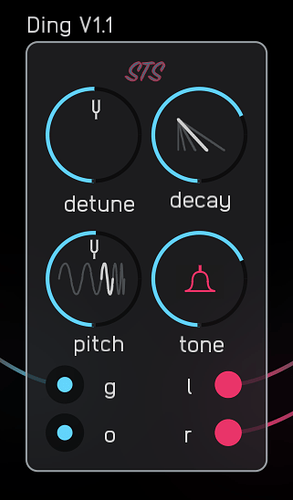 This is a bell simulator based on physical modeling. It uses a series of resonant low-pass filters tuned to the partials measured from one of the bells in Winchester cathedral. The module is excited by a pulse on the gate input. There are controls for the pitch, detuning, decay rate and tone. It can be used as a pitched voice by using an external 1 per octave input (o) with the pitch and detune controls set to center. The module features a stereo output created by panning the partials with a pair of LFOs. This one is a bit heavy on CPU because of the filters but I really like the sound

Wow, that is incredible, the tone sounds super realistic but you would probably never hear a sound from an object that big in an isolated environment so it sounds almost too real so much nuance to the various parts of the sound over time)! Modulating the octave input on a low tone (I liked it dropped down 2 octaves) with a long decay sounds downright ghostly.

Also, I really appreciate that the decay of the bell graphic looks as realistic as the sound.

Yes this sounds fantastic. I like the convention of having the tuning fork appear when the pitch is at center. Very useful since a double tap does not presently center in Audulus 4 as it did in 3. 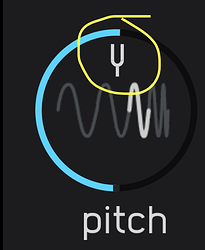 Terrific module @stschoen . I added the module to a generative patch I created based on a patch made by @biminiroad in his Wired With Mark YT series - relaxing bell drone/pad.

Great patch! Thanks for the compliment.

This physical modeling approach really is nice, such warmth and character. I like the tuning fork convention for center position, too.

How’d you come up with that biquad low pass formula?

I cannot tell a lie, The A3 version of the bell used the A3 resonant filter node and I was having trouble getting the biquad to behave the same so I asked @Taylor. He was kind enough to share the code for the A3 node which is biquad based. I duplicated the A3 filter using the biquad node and it works perfectly.

The Ding module can’t be used with a polyphonic signal (which is ok!) because it takes advantage of poly signal chains inside the module to simplify its design. I developed this patch as a way to work around that by creating 4 copies of the module and using a shift register to ping them one at a time. The sample and hold grabs each pitch when pinged by the shift register and holds it so the bell is allowed to ring out on its held tone. The left and right signals are combined and sent through a little drive and delay module and on to a reverb to add some atmosphere. Rather relaxing patch and was fun to make!

Great job @stschoen this is an all-timer great-sounding module.

As always, there’s lots of gems hidden within an STS module.

I used the poly node to clean up the internal wiring, but it would be fairly simple to remove if you think it would improve the usefulness. I never considered that nesting polys isn’t a thing.

Sounds great. For my education, what is the benefit of combining the left and right channels from the 4 Ding V1.1 channels to separate Combine modules?

I feel module development will always be way beyond my ageing mathematical skill level … included principles and formulae etc have been long forgotten lol. I will probably always be a tweaker of the work of others…

That would be really neat if it were, but I get why it isn’t.

I could have actually just mixed those together with the 4x1 mixer, that’s all that’s happening there. The left and right channels need to be summed independently to keep the stereo bell effect, but that’s all. I was thinking too hard about it since the left half of it needed more complicated wiring haha.

ok thanks for explaining your reasoning. I thought there were perhaps ‘simpler’ ways of achieving the same, but wasn’t trusting my intuition haha…