Build Request: an arpeggiator similar to the EQD Arpanoid?

For anyone who doesn’t know what I’m talking about, here’s a video. I was just listening to Controlled Bleeding’s album Knees and Bones (great death industrial album, by the way, totally recommend), and they had this strange little arpeggiated section at one point that reminded me of this Earthquaker Devices pedal. I’m wondering if there’s a way to build something like this in Audulus, that basically takes an incoming audio signal and arpeggiates it. Thanks, as always, for your time!

Well there is no sample node, so you would have to pitch shift the looping audio with the pitch node. Here’s an experimental test of the concept. 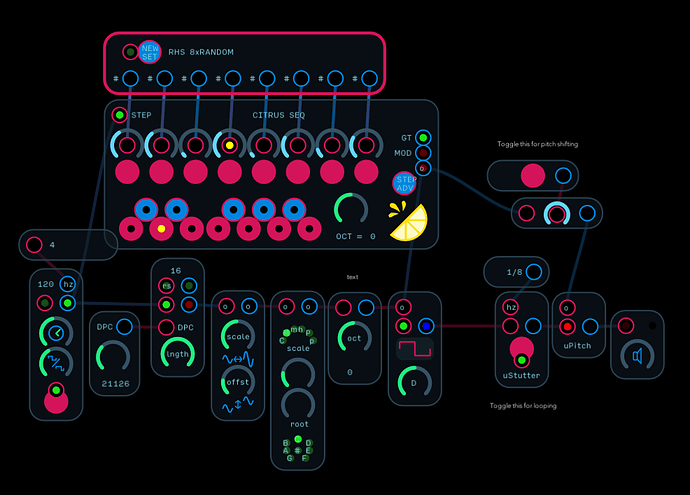 Whoa, this is so cool, thanks for making this! It’s funny you mention the sample node, though, because as soon as I posted this I immediately thought of the lack of a sample node in A3, haha. It’ll be cool when A4 comes out. I’m assuming it’d be possible to make a PLL with it?

Hey @robertsyrett is that the only way to make an arpeggiator in A3, currently? I was just wondering recently if there might be a way to make one similar to what I have in my Microvolt, where it is a monosynth, but with a push of a button, it becomes a powerful arp, capable of up to like 16 steps. Can this be done without audio sampling?

Edit: in my mind, I am picturing something with a step sequencer node or a multiplexer, and a clock, and somehow it reads the key values from the MIDI incoming and assigns it to the steps, but I could be missing something important. I am not sure if this will work.

You might find this interesting. The keyboard latch wasn’t a complete success but the arpeggiator itself works pretty well. Since we’re limited to a quad signal in A3 it will arpeggiate 1 to 4 notes, but as an experiment I built a 5 note version with individual inputs.

[39%20PM] This is my attempt to clone an UltraNova ARP Module. Not quite as flexible as the original, but fun none the less. I had to limit it to four notes since that is currently the max polyphonic split. The keyboard module has a latch function that will latch 1 to 4 notes and resets when no key is down and selectable velocity out. The gate and o outputs are quad. The internal timing is a bit tricky, so you may get an occasional missed note. The ARP features Sorted/Unsorted, Random, Altern…

What about using the Blobulator?

It has pitch shifting. I wonder if there is a way to get the tuning to lock. I was working on a patch a couple of days ago and actually wished I could feed 1v/O into this module. Maybe @stschoen could weigh in on this?

An interesting idea. Not sure if it would work but I’ll give it some thought.