I can now see audulus in Logic Pro. When I add it (it=Audulus (effect)) to my audio track I can’t seem to get either 1) mic input OR 2) output from the plugin. I’m testing it with the The 11th Dimension Delay. The patch works in Audulus but not as a plug-in (effect) in Logic. Its probably something simple but i’ve clicked around searched online/youtube/reddit and can’t find anyone using audulus in Logic yet. 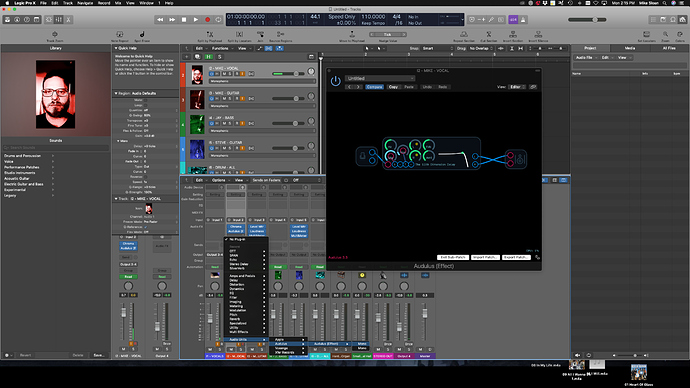 Welcome! Thanks for downloading Audulus

Can you try bypassing the effect and wire both the outputs of the mic node straight into the speaker node to see if it passes audio?

Hi Mark - thanks for the extremely quick response and direction. I’m out for the day (day job). I’ll be looking at this later in the evening.

I may have prematurely ruled out that the effect wasn’t the problem since it works fine in Audulud and it’s an effect packaged with Audulus. I will test ASAP.

Either way we’ll get it working ASAP!

Hi Mark - i tried wiring the mic directly to the speaker. No dice.

Ok next thing to try is using the MIDI Instrument Plugin - can you get that to make sound? Just trying to narrow down what exactly is not working - no sound at all vs. sound output but no input. You could also just plug an oscillator directly into the sound output and see if that works. Make sure you try the MIDI version as well though in case there’s something wrong with the effect plugin.