I like the patch! Nice harmonies.
I got the final version working this morning and discovered that it has some interesting quirks. Because it is possible to play a series of intervals that result in the quantizer getting progressively farther from the starting pitch, eventually you reach the point where two keyboard notes quantize to the same output value. In order to resolve this I think it will be necessary to change approaches. The current model captures the quantizer output and uses it to transpose the input, but I think it will be necessary to determine the required interval first and then modify the current output accordingly. Back to the drawing board. Just for grins here’s what I have currently:
Sliding quantizer dev.audulus (202.2 KB)

So I have been in communication with a couple of redditors who work primarily with microtonal music, acriel (mentioned above) and FlyNap (who works exclusively in JI)

I asked them both about how they navigate JI

I take many approaches to JI. For example I might find a set of small 5-limit intervals I like the sound of, and the use an algorithm to find all the different sets of them that fit in a span. Then take that span and repeat it up and down using the harmonic/subharmonic series.

The things that make my approach different:

A scale you might be interested in that is sorta like 31 EDO, but is actually just is 22 Shruti. It’s octave-repeating, but it’s a wide octave. The component intervals are explained on that site. I find it really elegant. As for finding nice harmonies - just use your ear. You’ll find consonances unavailable in ET.

Here’s a version that works a bit better. It still has a few issues but at least the interval changes work properly. Set an initial note using the knob and reset the unit (A = 0, A# = 1, B =2 etc.) It will calculate the interval and modify the output accordingly. Like the earlier unit the actual pitch generated by an input note will change depending on the notes played before.
Sliding Quantizer Mark II.audulus (285.7 KB)

Maybe I should call its the NTSNT quantizer (Never The Same Note Twice)!

Each note has a unique existence! 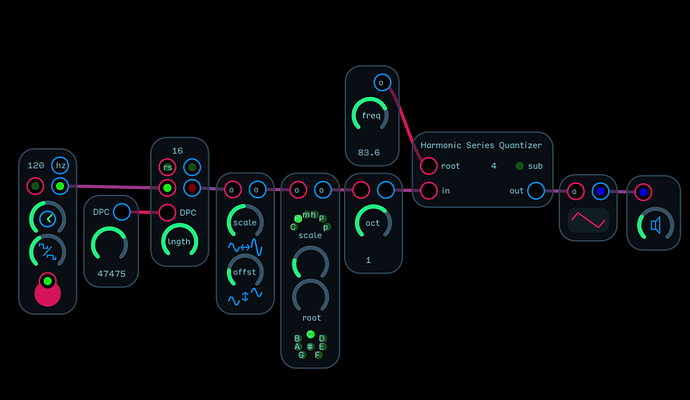 Here is a fun one, a quantizer that snaps to the harmonic series of a root note. It’s a fun way to be microtonal (high order harmonics played against each other can sound pretty dissonant while low order harmonics are very familiar intervals) while preserving just intonation.

It’s interesting how attempting to keep the intervals “just” leads to dissonance eventually. I’ve learned a lot about alternative approaches to tuning during my sojourn with Audulus. Who knew there were so many scales? As lovely as a perfect fifth sounds, I think I’ll stick to well-tempered for the most part. Still, it’s wonderful to have the tools to explore the alternatives without investing a fortune.

My crazy hunch is that only phenomena that have (no idea what the proper term is) certain properties like those of automata, properties that make their shape incomplete, only systems that have this spiral-like subsistence allow for a peculiar kind of novel expression. Along with this aspect comes another which is present as an idea of incompleteness. Various parts vanish into the dark while other parts are in focus. But this allows for a non-symmetrical landscape in between any two points. Analog has it. It may be an ingredient in life, which is why Conway’s work is useful for making predictions about complex weather patterns by constructing models.

A little side note re. the tuning resources I mentioned finding in the Wilsonic and AudioKit Synth One apps. From the latest Synth One update:

Many people don’t realize that MIDI also has a way to implement tunings other than well-tempered. It’s not widely supported but the standard (MTS) exists:

MIDI Tuning Standard (MTS) is a specification of precise musical pitch agreed to by the MIDI Manufacturers Association in the MIDI protocol. MTS allows for both a bulk tuning dump message, giving a tuning for each of 128 notes, and a tuning message for individual notes as they are played. If ƒ is a frequency, then the corresponding frequency data value d may be computed by The quantity log2 (ƒ / 440 Hz) is the number of octaves above the 440-Hz concert A (it is negative if the frequency is belo... 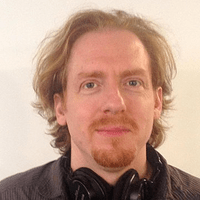 John Lee Hooker constantly uses the “neutral third”, the pitch in between the major and minor third, by bending his guitar strings a little. It isn’t just an ornamental thing, he’ll do it in riffs that repeat under the entire duration of a song.

There is a pretty happening thread over on the lines forum about microtonality. Thought I would link to it in case anyone browsing this years in the future needed to go further down a rabbit hole.

[image2] Relative Just Intonator A few months back I saw Jacob Collier explain a novel tuning concept where each note in a chord is tuned to the note below it, instead of every note in the chord being tuned to the root and/or tonal center. An example: if you play CGD, you would tune the G to the C, and then tune to D to the G. This patch explores this concept, and allows users to play up to 16 note chords, and turn the mod wheel to change between equal temperament and this “relative just” tem…

This is definitely a valuable tool for exploring Just intonation, TY @PianoManDan 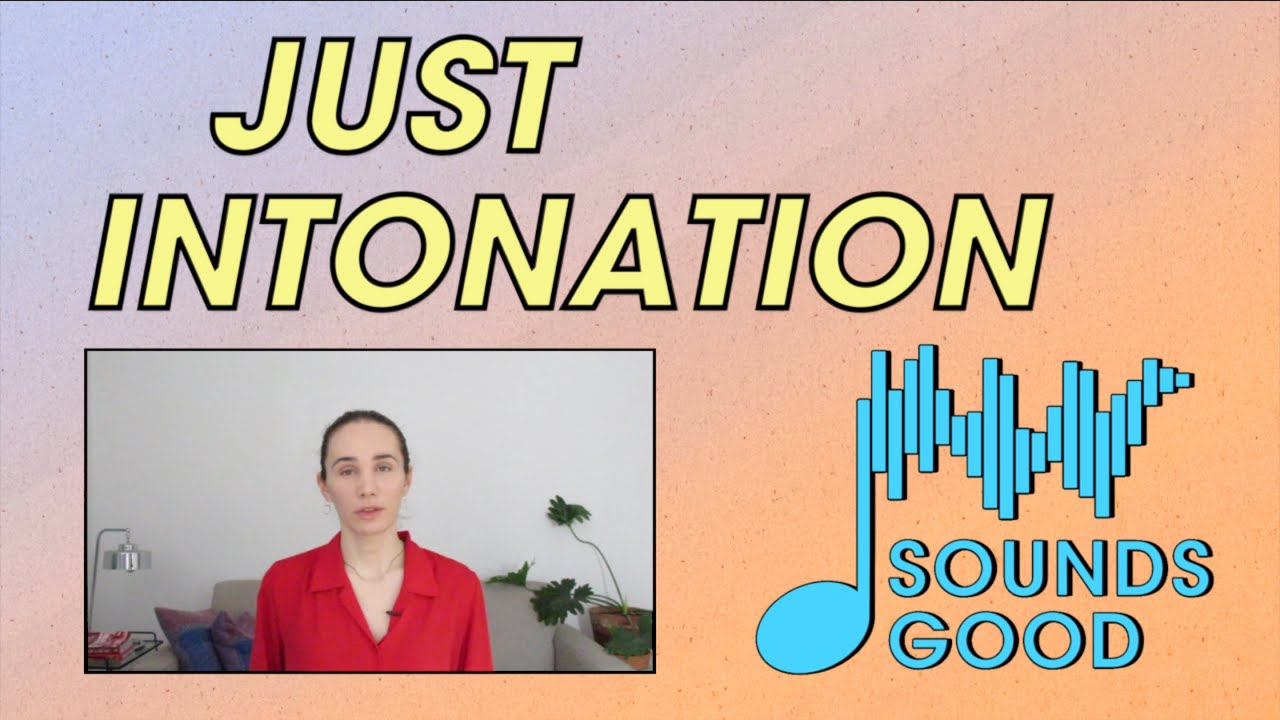 as if no time had passed at all.

The latest update to the Hydrasynth software has support for uploading and downloading microtonal scales (.mts files) I haven’t tried it but probably should. It can store 32 microtonal scales and has a bunch already preloaded including some Just scales.

I’m curious, can you play the hydrasynth with cv and gate?

The minilogue xd has just intonation as a menu setting, but they are kind of vague about which system they are using.

Hi Robert CV and gate are outputs only. You have two CV mod inputs but no gate, and Pitch CV, Gate, clock and two CV mod outputs. The Hydrasynth has several Just scales bundled and you can download your own if you like.
Steve

Here’s an interview between Richard D. James (Aphex Twin) and Tatsuya Takahashi (a design engineer for Korg), in which they have an interesting discussion with regard to this exact subject, different ways to implement, and the results of said explorations.

It’s an interesting read, and it has given me some new uncharted territory to explore! @robertsyrett I stumbled upon it while looking for info about my Minilogue XD and whether or not the .mts standard files would be something I could somehow upload to the MXD. I was not able to find anything about the file format, but they give a pretty decent explanation in the manual on page 50 about how to program scales from a template, with more information about pre-made scales which can be edited to make your own on page 36.

I have read the manual 3x over in the past, but this is the first time I noticed the info about micro-tuning. It’s interesting how I manage to overlook things I’m not looking for atm, until later, when I actually need the info and don’t know where to look lol. I hope this is helpful to you also!

Since having gotten the wonderful Sensel Morph I’ve been jumping back into experimenting with tuning systems. The Audio Damage Continua is a very nice synth with support for TUN files, which can be generated online at the Sacle Workshop mentioned in the just intonation video above: Scale Workshop 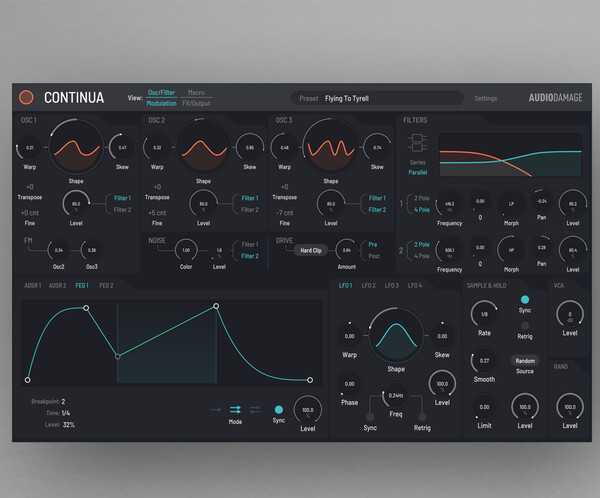 Marcus Hobbs has a nice post on the AudioKit blog about the Wilsonic and SynthOne apps that I mentioned a while back in this thread (with some good videos on how the tuning stuff works): Share Scales between Apps with AudioKit TuneUp – It's like Ableton Link, for Tuning | AudioKit Pro 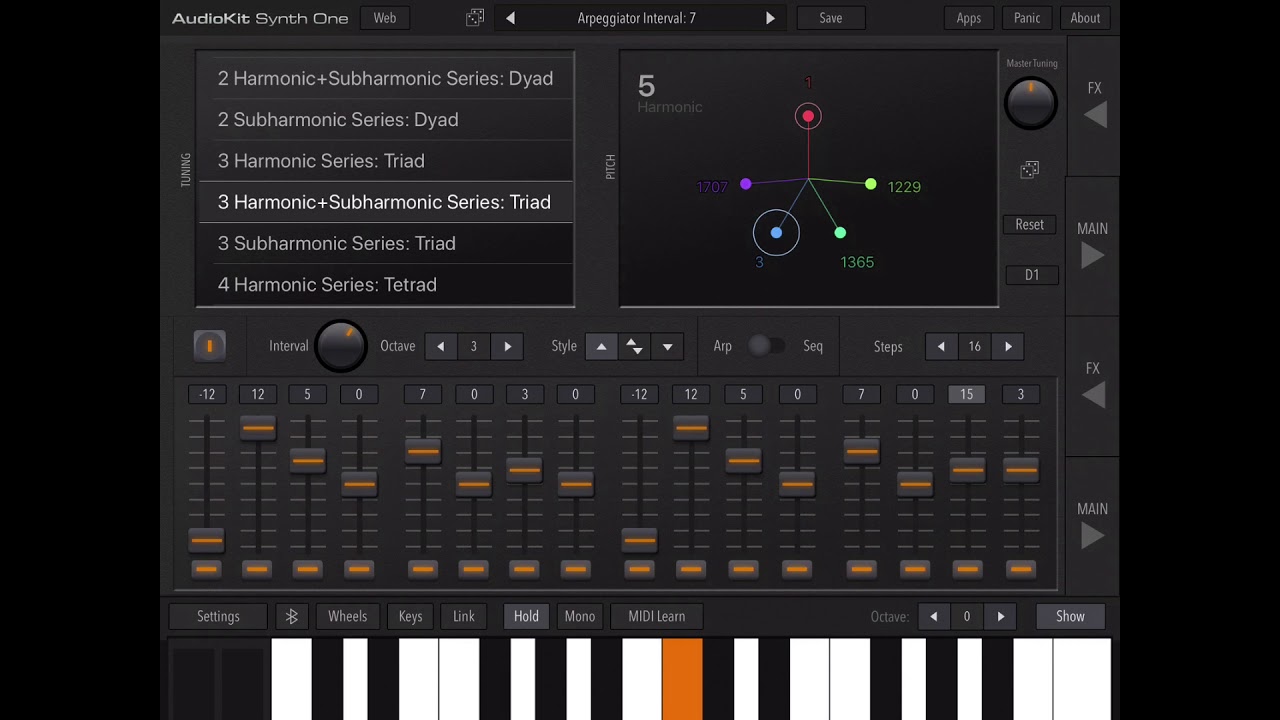