You think Plaits is really the next Braids? Like people are loving it as much/more than Braids?

For sure! Braids was like a collection of things Oliver had learned about and implemented into an oscillator and you switch modes, where Plaits is the distillation of those disparate elements into an integrated instrument. There are more parameters to modulate and more outputs to play with. Oh, and it’s less expensive and takes up less HP. I’d have bought one already except I’d have to sell something to make space and using the VCV version has proven sufficient for the time being.

what do you think about something like the Eventide delay as an alternative though?

Yeah! That’s another module high on the list of things to consider. It’s a “I’m not messing around, I am serious about DSP” type of module and that appeals to me. The only other delay module that speaks to me as much as EuroDDL is the Styrmon Magneto, but since I have the El Capistan Pedal I am inoculated from splurging on that just yet. 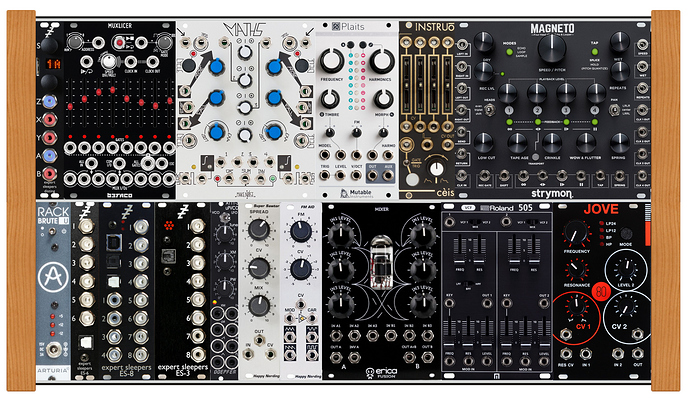 Looks good to me! Awesome even. But still so go slow with the acquisition as every plan will need adjustment.

Mantis case, ES-8 and Morphagene is how I started my system. However, as mush cool Morpho can be, I find it too noisy and clickly for the premium price I’ve paid for it. There’re clicks, broadband noise, and GPU-like whine, which is hearable acoustically at all times, and sometimes in the audio path. Somehow this whine even gets to my Happy Nerding MMM VCF, which is next to Morphagene.

Maybe its me using it more as an effect, often in feedback situation. Maybe I should go back to default settings or something.

Still I was able to layer some el.cello textures with this system and VCV: https://soundcloud.com/fedor_t/morphagene-sadness

So yeah, I guess I woudn’t buy it if I knew any of this beforehand. Perhaps 4ms STS is a better option for eurorack sampler to showcase with Audulus - a bit clearer and grounded layout and terminology, dual mono action, more straightforward overall. Separate button and knob for pitch/speed and reverse! And CV all over the place.

Somehow this whine even gets to my Happy Nerding MMM VCF, which is next to Morphagene.

This is the bane of my existence in modular. I’m hoping the better power supply in Arturia’s will reduce some of the noise I’ve been getting in my current one!

That said you might want to contact Make Noise and see if you got a defective unit?

it too noisy and clickly for the premium price I’ve paid for it.

I know more than a few people who bought a Morphogene and switched it out for the 4ms Stereo Triggered Sampler, which is far easier to understand. No funny lingo or squiggly lines on the face plate. Just samples being triggered and a ton of CV parameters for the basic things we are already familiar with. You can still get plenty weird with it though.

my issues are only with noise and clicks, I sorta understand how the module works. But STS is what I’ve been thinking about recently.

You might try a firmware update for the morpho if you haven’t already. But yeah, 4ms makes some high fidelity gear.

it came with the latest firmware from the factory) I guess I better not be shy and reach out to MN.

Regarding the Chronoblob. I was mentioning syncable, dividable, clockable delay. Brambos Kosmonaut on iOS for example. One thing I would suggest though, @biminiroad is to slow down a bit and maybe try to think a new way up the mountain. Introductory courses, best of’s, and ‘essential’ this or that is not for everyone. I would suggest making some music and getting into some weird patterns. My 2 cents.

Here are some topics I’m thinking about starting off with - each would be its own video potentially. Would love to hear feedback and other suggestions. These videos assume this basic configuration: 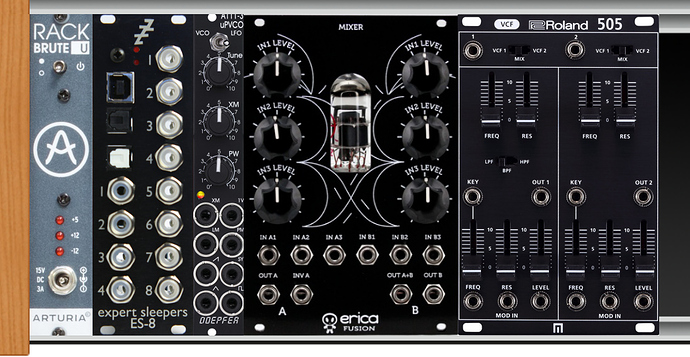 Why ES-8 is the superior choice for Eurorack (and what are your alternatives)
Analog vs. Digital vs. Hardware Digital - making the most of each
Latency and how to deal with it
Planning your rack around ES-8

1/oct to VPO
Oscillator Sync how to
FM/AM/PM - linear vs exponential
PWM and you - how to make the most of PWM
Creative mixing
Suboscillator
Supersaw creation
Polyphony
Animated vibrato
“Tape warble” and the importance of detuning
Analog vs. Digital Oscillators
Waveshaping in Audulus

Beyond the envelope - adding more modulation
Modulating resonance - when and why
Why VCF before VCA? Different configurations
Keyboard tracking and why it’s important
Stuck in LPF - when and why to use other filter modes
Dual VCFs and duophony
Integrated VCAs vs VCA in Audulus vs External VCA
Turning your VCF into a VCO

One thing I would suggest though, @biminiroad is to slow down a bit and maybe try to think a new way up the mountain. Introductory courses, best of’s, and ‘essential’ this or that is not for everyone. I would suggest making some music and getting into some weird patterns. My 2 cents.

Yeah definitely I hear you - just trying to think ahead and also window shop while I wait for my new modules to come in hah! I used to think I wanted a rack to play live with but I think I’m more into something that is versatile and I can repatch a lot. The way I had my rack previously, it stayed patched the same way all the time, and though that’s an interesting way to approach it, it doesn’t really offer a lot in the way of versatility and sonic exploration - not to mention videos that people will keep coming back to

I guess I better not be shy and reach out to MN.

It’s also worth experimenting moving it around in your rack into a different position away from your other digital modules - it might just be picking up some stray noise for being near something else.

20+ videos?! That ought to keep you occupied.

I plan on them being as short as possible to be digestible - no 20m+ deep dives. I’ll script them too so they’re quick and less meandering.

Just to continue with my 2 cents. One of the things I liked about the documentary I posted on desert rock, is you get the sense that in that scene it was all about the fact that if you are the only band all night long in the desert, you have to make some room in the middle of your songs for about 15 minutes of exploration with the other band members. Organized disorder.

With the whole youtube music producer tips genre, it is heavily influenced by office culture. You hear of people with creativity plans, and goals to produce one track a week or whatever. The thing is, and everyone is different, I think there should still be something a bit badass about making music, a bit mysterious, underground, heady, difficult and spot on forward focused.

Forget the intro stuff! Give me a sightline on the cutting edge – I’ll handle the fundamentals when they occur naturally. This is the school of thought founded by, among others, John Dewey. When Dewey helped to found the first experimental school of education at the University of Chicago, he was hoping that we all might head off in idiosyncratic directions with the understanding that, for example, we like Bob Dylan because he is weird like us, not because he is the same.

“You all understand drums well and fine. Here are some techniques for being able to sequence drums over an hour and not loose your audience while managing other changes. This is why Audulus is indispensable for me in my performances…”

If you approach it this way, Audulus 4 can start to take on some new shapes since you will be actually facing routing, sequencing, quantizing, compressing, monitoring, tuning, mixing, and all of the other duties.

Again, instead of imagining that you “need to buy some modules to convince people that Audulus is a product they should take a look at,” you go with the midset, “I really want to work on some drum and bass fills, how would I use Dinky’s Taiko and get that nice fast gated effect.” But when you solve it, you don’t stop there. You move on to figuring out how you can get those fills to sit right with the kick and bass drums. To me, it is the difference between the guy who works all year and actually shows up to the craft show with wares, and the guy who follows his wife around with his hands behind his back, smirking from ear to ear, whispering that “he could make that,” every other time she lifts up a nicnac to admire it.

The Xaoc stuff intrests me. Some of the “computing” is interesting. I think that sequencing is the elephant in the modular room. Their envelope module looks killer.

The ES-8 is amazing! I literally got one just to use with Audulus, so the videos you’ve done in the past have worked in that respect. (Just want to acknowledge that in case you felt like you hadn’t hit the mark.) That said, more ES-8 videos plz!!

Lots of good points made already. I like the video ideas you’ve gathered already. I think there’s room to do “instructional”/set-up time videos as well as more performance ones that take the viewer’s knowledge and enthusiasm into account, like what futureaztec mentioned.

I think you should pick up a few modules that are really popular, as that’s what’s going to catch a lot of people’s eye and open up Audulus to them. The Erica Pico Drums is one that immediately comes to mind. Just Audulus/ES-8/Pico Drum/maybe a filter… just whack it up with modulation/sequencing from Audulus. Rings is another good one.

I don’t know if you want to go down this route, but Audulus works amazingly with Eurorack video modules, specifically LZX Industries modules. These run on a -1/+1 modulation range but accept higher levels to accommodate Eurorack audio modules. The built in attenuators on the ES-8 module in Audulus are just perfect. I use Audulus A LOT to modulate video. I would be happy to make a video demonstrating it.

-The “infinite VCA” idea you mentioned earlier in this thread
-Using the inputs on ES-8 (admittedly I tend to only output from Audulus and haven’t explored the inputs)
-Instructional vs. Play videos (you’ve done this a bit already in the past. I think short, standalone play videos with minimal instruction/talking are really effective.)
-Using Audulus/ES-8 in conjunction with a more experimental system, not just sending v/Oct or modulating filters. Phonogene and two Noise Reap delays are the center of my system… Audulus allows me to do many different things within this framework.