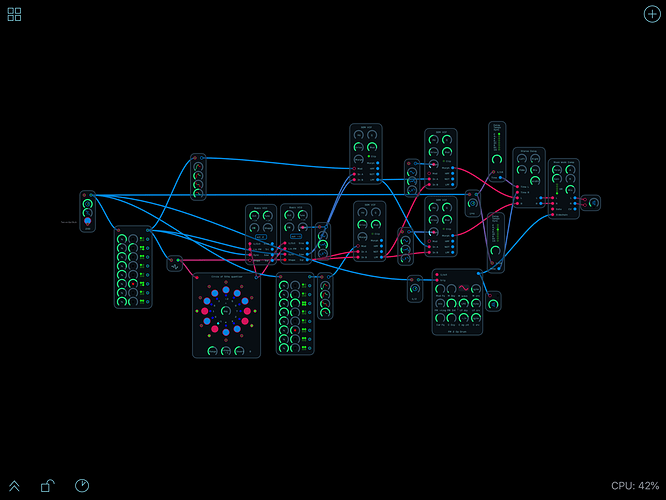 I have been feeling limited with various devices failing. I decided to try running Audulus as IAAP within Cubasis 2 LE. This allowed me to feed it a tight midi clock and record waves. Then I froze the tracks to save CPU and built some more layers. Then Cubasis froze. So I exported a mixdown into BeatMaker 3. I dropped the mixdown In and built more layers. Then I processed that file in AUM.

I guess the point is that when you have enough approaches laying around it allows for adapting. I enjoyed getting out of the strict generative Audulus stand-alone and capturing instead. Here’s the main Audulus component (other bits were used, like the Linnish Kick and Gatecreeper): 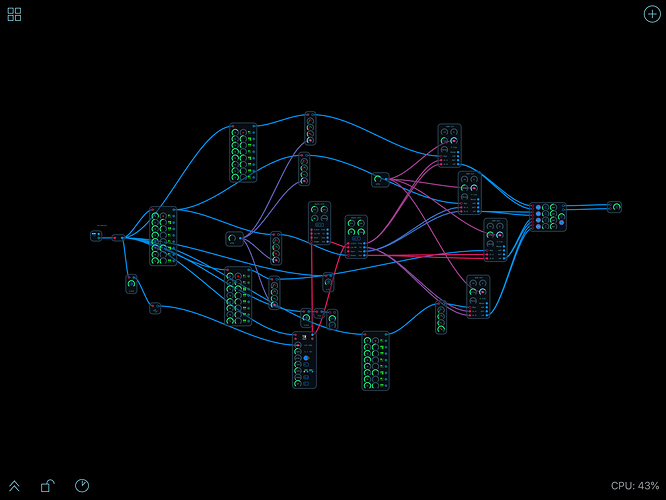 I‘ve been trying to get into Cubasis 3 lately but I‘m a bit frustrated with the cpu limitation. Maybe I was naive to think that I could use a DAW on the iPad like one on a Mac (with a lot of AUv3s running at once)

What approach/workflow do you use with Cubasis? Should I try to do as much as possible in one app?

Okay. I thought I should share what I did because I kept hitting blocks, but since I had bought some good apps over the years I was able to happily apply them like dusty tools.

One thing I like to use is KQ Dixie Auv3. It’s super light and you can deploy all the FM patch archives from e DX7 library. Further, I like it as a placeholder to feed midi. So you can grab a voice and drop it in then move on which keeps the workflow fast.

CPU wise I was running an iPad mini 4 which gets bogged down fast. So, I used the Cubasis freeze function to capture the Audio wav, then I would just disengage Audulus. Now the upside with this is that you can always redeploy a synth and get rid of that wav so that there can be more tinkering/variability over, say, 64 bars.

I really enjoyed then taking the half baked mixdown from Cubasis, but then just dropping it into Beatmaker 3 as a backing track. Then I jammed and arranged over it with the BM3 tools. Obviously it’s a fairly simple track and not wonderful in terms of mixing and master — but I had a lot of fun.

All in all I would say that the main thing is to get interested and keep the momentum going, grabbing this and that and not getting bogged down in any one element. You can always switch out a KQ Dixie voice for a custom Audulus synth, for example.

Finally, the tools Audulus has for generating music and instrumental variations are a remedy to those of us who have very little music knowledge. When you take that and couple it with a structured DAW, I think you start to play to strengths. Additionally, being limited by the iOS platform forces creative solutions which, it seems to me, are the opposite of the daunting blank slate of a fast computer and a whack of sexy hardware. The new devices will inspire for a short time but, realistically, that can lead to a consumerist relationship with music production.

Nice track! A very creative approach to working around the limits of your current hardware. Flattening tracks is not a bad idea even on a relatively fast system. I often use Softube Modular running in Live as a flexible softsynth. It sounds great and is probably about as close to the original hardware as it is possible to get but that fidelity comes at a pretty high cost in terms of CPU load. I often flatten tracks to buy myself some CPU headroom. I’m looking forward to finally having an AUv3 version of Audulus so I can incorporate it into my workflow as an alternative. Currently I have to run Audulus standalone and do unnatural things with my ES-8 to get it into Live.

First of all: nice track

(finally had time to listen to it

Thank you both for these insights.

I think flattening/freezing can even be used as an intentional creative limitation to keep yourself from infinitely tweaking one sound.
However, the Problem I had was that I couldn’t even really start to develop some ideas for a song before I ran out of cpu. So I’m definitiv going to try to work with more lightweight synths first on the iPad. (I guess using the moog apps for everytging was a stupid Idea

Also try raising the buffer size if you can. Lower buffer sizes really tax the CPU.

Ah yes I do that in Ableton too but somehow didn’t look for it in Cubasis.

At first I couldn’t find it in the settings because it is called hardware latency.
Unfortunately the maximum is only 11.6 ms (512 frames)
I tried loading Cubasis inside Audiobus and setting the buffer in Audiobus (here the maximum is 2048 frames) but this leads to some problems.
E.g.: side-chaining is shifted

That’s true. An operating system certainly shouldn’t get in the way of learning how to make sounds.

After he edited the post to include some suspicious links I decided it was spam and deleted it.