Is it possible to randomize the Random Amplitude Sine LFO to include other waveforms?

Long story short, I recently purchased an Infinite Jets pedal, and it got me thinking about how to screw things up with LFOs. I really like the Random Amplitude Sine LFO available in the module section, but I’m wondering: is it possible to make it randomly go through other waveforms as well as sine?

Bonus Question: Is there a way to make the attached patch truly “random”? What I mean is that I’d like to be able to replace the Speed knob with something that will pump out random signals? I’ve been using variations on this patch to make a lot of my noise patches, and I’d really like to try to make it even more chaotic.
beepboopbeep.audulus (1.6 KB)

As always, thank you all! I’ve been meaning to be more active on this forum other than just showing up when I have a question—after all, I really appreciate everybody’s input, and I’d really like to be able to spread the love around, similar to what @futureaztec asked last year.

[31%20AM] Random Clock We have a good collection of modules for generating random and quasi-random values of various types but they either generate a continuous stream of values or are clocked in some fashion. The clocks themselves are usually periodic. We do have a random clock in the library but it also has an internal periodic clock with random divisions. I wanted to build a module that has a random time between clock pulses. I ended up using a random node and timer. The random node produc…

This will produce random clock pulses. A pulse width much narrower than the rate will produce the most random results. You can also enable a random pulse width if desired. There’s a random 0-1 value output as well that can be used a a modulation source.
It would certainly be possible to build an LFO with a random waveform as well as amplitude. You would need to add an expression node to generate each waveform, and a switch to randomly select one each cycle. I’m tied up with testing Audulus 4 at the moment but it sounds like a neat project if I get a chance.

Thanks for the heads-up! Also, I actually just figured out my own solution. I don’t think it’s truly “random”, but it has the sort of chaotic nature that I’m looking for. I also actually created an LFO that cycles through all the wavelengths at random as well—I’ll post that as soon as I’ve finished it.
tr00 random.audulus (8.9 KB)

By the way, is there any way to get inputs on a mux/demux to blend like they would on a crossfade node? I tried just taking the floor out of the expression node, but that didn’t seem to do the trick.

By the way, is there any way to get inputs on a mux/demux to blend like they would on a crossfade node? 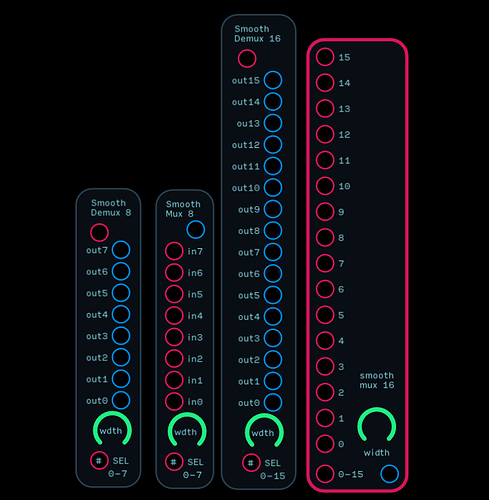 The width control is full steps at 0 and full crossfade. Also these use the smoothstep function rather than the linear equation. That was mostly because smoothstep is so dang convenient.

So…instead of starting another thread, here’s a question for y’all: is it possible to get a trigger to operate a mux/demux? I’m working on a patch that will hopefully switch between manual, random, and stationary modulation, and I’m trying to save visual space on the patch. I also thought it might be a cool idea to add a RGB light to save visual space as well, hence my addition in this sample patch.

I’m not sure exactly what you had in mind. Do you want it to step the output each time it receives a trigger? If so, then a counter attached to the select input would would work. If you want it to switch through all outputs in sequence for each trigger, you would need a ramp:
Triggered Demux with counter and ramp.audulus (24.7 KB)

Sorry, yeah, my wording was a little confusing. I’m basically looking to replace the knob in a demux with a trigger. The idea is that each time I press the trigger, the demux goes up an output, until it reverts back to the original output.

I’m basically looking to replace the knob in a demux with a trigger. The idea is that each time I press the trigger, the demux goes up an output, until it reverts back to the original output.

This is a nice way to change up the UI

.
Note, however, that this won’t save the selectet output.
It will reset every time you close and reopen the patch.

Here’s a forum conversation regarding the topic as well:
Knobs that crossfade between multiple things
Here’s a 10-channel crossfader I put together from the Infinite Xfade module, but keep in mind it is not the lightest on the CPU-usage: 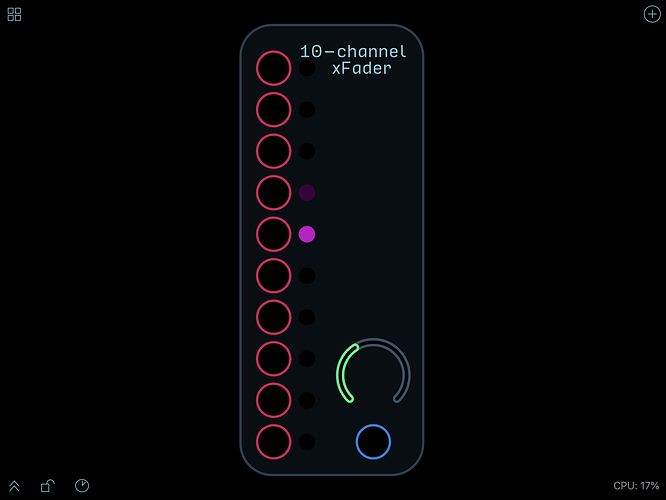 Yeah, that’s true, but I’m actually okay with that. I actually tend to turn all the exposed knobs in patches back to zero after playing anyway. I guess that’s OCD for you, haha.

Glad to know I’m not the only one with OCD.