Just at a brainstorming stage…

I tried adding a second looper. Immediately two things occurred to me.

Even fancier (but foreseeably useful for many applications here), would be to have this switchable gate have two types of buttons in one module.

Button A) When engaged, this gate remains open, as when disengaged, also remains so.

Button B) This would be the same as button A, except it has a separate gate input that can tell it to close. The idea here is to have separate gate Inputs for opening and closing. This would make it possible to have a synced record start when the clock starts but, once in playback mode, at anytime a guitarist could decide to “arm” the overdub as soon as the clock completes the bar cycle.

I understand that a lot of this is probably ultra simple and kicking around but, when you aren’t a builder, many of these small modules aren’t where you go to look for them in the libraries, or there are two or three other details that get in the way of them working straightforwardly. For example, a new user would probably get tripped up by not realizing how important the “gate to 10ms pulse” is to get things to talk to each other properly. Also, sorry if the above is confusing. It’s not easy to communicate without a standardized vernacular, which builders would be more familiar with in speaking to on another. 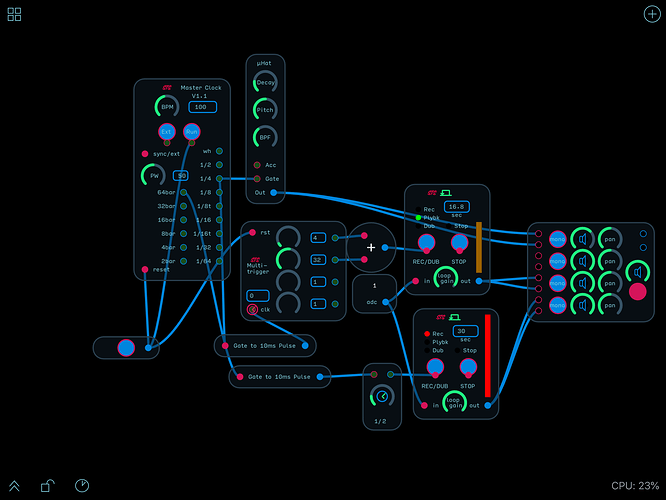 I tried inserting a clock divider between bar 64 and the 2nd looper’s record/dub button. The reason being that on any start of the master clock, all bar gates fire. It looks like the clock divider remembers its place when one closes the patch. That’s an issue.

Another issue in this setup is that the count in starts the looper 4 beats after the clock starts, which puts the looper out of time with the clock. I wanted to share this so you could see what arises as you start to use the looper in the context of other modules, but also in the context of a person holding a real instrument plugged into Audulus, wanting to work smoothly. Again, I think the possibilities are incredible, but getting the basics really tight seems key. In the past I have found ways to scramble and just make stuff work in order to get songs finished. But it would be nice to start to make more complex music, while remaining in the mindset of one take/performance based audio production.

I am wondering if the best approach might be to mostly alter the clock, making a looper specific masterclock. This might include a “count in phase,” which would be generally useful to all musicians wanting to live accompany a patch. “And a one, two, three, four…” which would happen only once when starting the clock for the first time, where once counted in, then the whole clock starts its master cycle,

I modded the master clock to provide a count-in function. You can set the count in to 0,1,2,4,8 beats. The count-in starts when the run is toggled. Let me know how this works for you. If it seems OK, I’ll look at the looper.
Master Clock V1.2.audulus (214.9 KB)

BTW The type of gate you’re talking about is a latch. Here’s an example. The set button will set the output high (1) and the reset button sets it back to low (0).
Latch.audulus (9.1 KB)

I modded the master clock to provide a count-in function.

That’s really awesome, thanks so much.

The Master Clock v1.2 doesn’t seem to be cascading through the bar gates. Did I the count in throw it off?

I thought I had that fixed. Let me take another look. 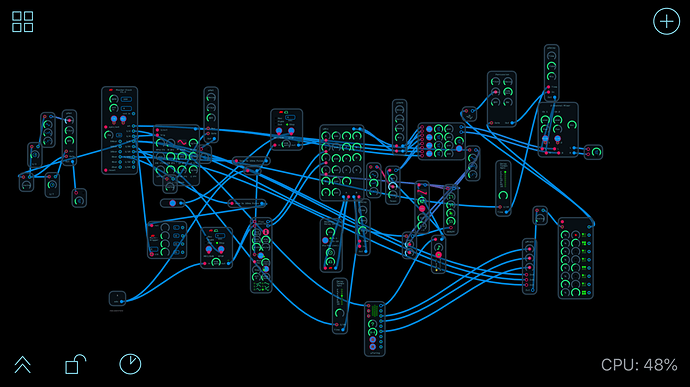 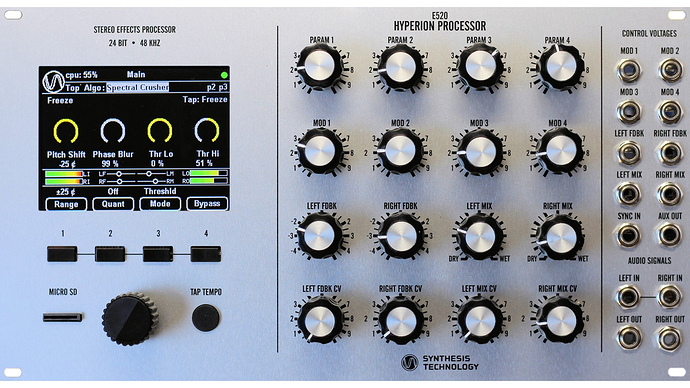 Around the price of the blooper pedal.

Also interesting seeing the programmers responding to feature requests on Kickstarter, tinkering with the DSP.

I can see a similar setup with Audulus, an ES-8 and the Midi fighter twister. 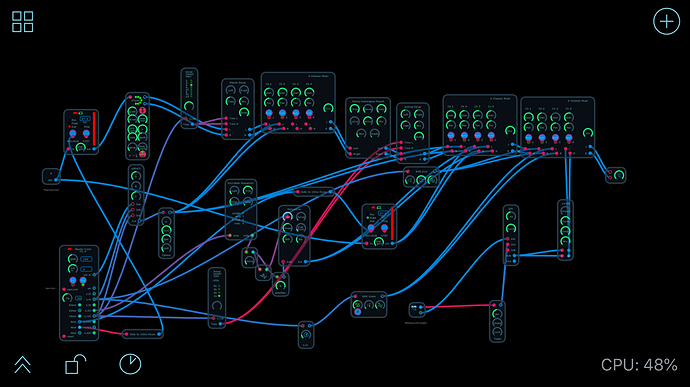 
Like the 808 Kick, Simple Looper and just found dTuner. 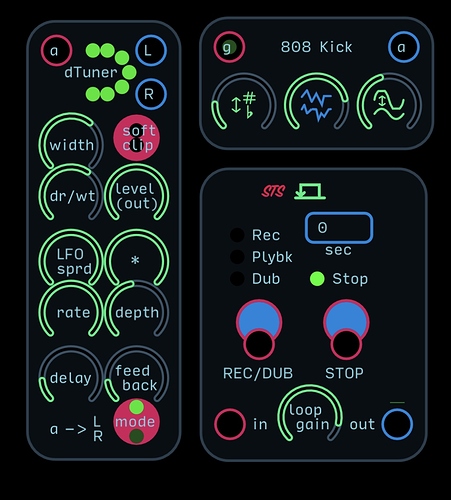 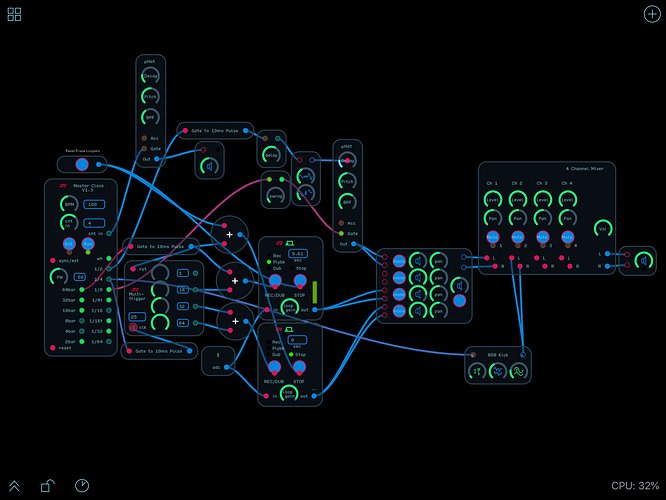 Starting simple again. Always reset the loopers with the button above the clock. The clock is set to a 4 beat count in. The first looper will start recording immediately and the second will start recording once the first has played back one time. It is set to produce a loop twice as long as the first. Once they have completed their cycles, you can hit the overdub button to add to the loops.

Everything has been kept dry to just focus on the joy of looping. I will be adding patches later with more complexity. But, wow. Audulus! Sorry ZOIA, sorry Blooper.

. Yes they are hardware and have advantages. But, I find, when we play to the advantages within Audulus, it’s its own complete world — like the original Nintendo games, it just draws me in like the the later video games don’t.

Speaking of loops, I assume everyone knows about the isolation packs from Hainbach and Jamie Lidell, if you’re looking for some material to play with:

And as far as these lockdown times go, how’s everyone holding out?
Well, I hope!

I have been trying to figure out how to implement the simplest function into @stschoen’s Simple Looper.

I just need a gatekeeper.

Here’s a look at the exterior of the altered module. 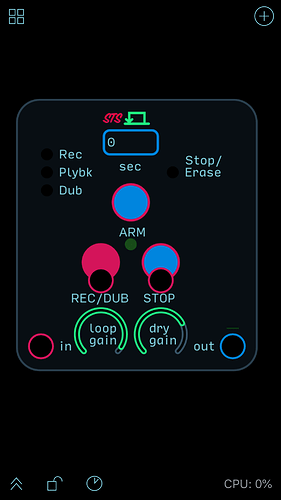 Because I am hardwiring the master clock onto the simple looper, I want a way to allow/disallow that clock from automatically recording. It’s a very basic function on a syncable looper.

I hope everyone understands why this is vital. For one reason, if you want to have 3 loopers hooked up to one clock and synced, you will want to be able to “arm” the third looper once you have finished recording on the other two. You don’t want them to fire all at once. But you can’t just hit record manually, because it will be out of sync, and you would need to throw down your guitar and hit stop record also. So I need an arming toggle.

it’s so simple but I can’t make headway.

I tested several sample and hold modules to see if I could get the gate to be interrupted/let through. These all seem to work fine when using a clock signal. But when I try to insert one of these into the node logic in the Simple Looper it never works out.

Here are the sample and holds:

I think that one key element is to focus on the result. So, there is already some mildly complex switching logic in the Simple Looper. Knowing where to interrupt might be the issue.

As I mentioned above, I am not huge on adding something outside the module. Use-wise it gets way too filled with wires and it becomes hard to operate because of touch screen space/zooming etc.

Just to make sure I understand how you want it to work. If I understand you, when it isn’t armed you want to block the rec/dub gate from passing through and when it’s armed you want it to pass. The real question is what to do if the rec/dub gate is high when you hit arm. With a simple switch, it would start recording immediately. If you need it to wait until the gate goes low and then high again that’s a bit more complex. Let me know what you need.

I think that in any of these situations the key is to make the symptom clear, or the goal transparent. If you purchase a hardware looper, even if it doesn’t have a sync input, it will tend to begin the overdub phase right on the first beat; however, the guitarist doesn’t have to try to time the record button. This is working for us because of clock integration, but as one gets further into making music, there are limitations. Typically, with a pedal, you have a few seconds to decide if you want to overdub, where when you hit record, the pedal will then note your intent and automatically start recording when the loop completes the cycle and starts the next phase. Ableton does this. So, although there may be many ways to achieve this, simply keeping the functionality of your design intact, while accommodating an “arm” toggle is the goal. Also, I do like that I can actually overdub and back out anywhere in an established loop, so I think it may be a matter of altering the relationship between the gate input and the REC/DUB signal path.

I think that some of what we are doing here is somewhat simple, but in terms of what is currently available and what will become possible, this is cutting edge — again, even though it isn’t necessarily cutting edge logic or dsp. From my perspective, at this point, it’s all about interfacing, control integration, standardization, and the end user. Audulus was marketed as a diy tool. However, there is so much treasure here that it ought to be known that it is at the leading edge of the music industry. I am sure there are manufacturers that have lurked about here, then taken an idea and put it into production.

So, I think this is the key: The clock is badass. No looping pedal has this advanced clock. So, figuring out the best relationship between the clock and the Simple Looper, so that the guitarist can work fluidly and flexibly is the actual goal or need. The strategy varies. I have several ideas by I don’t want to muddy things up more that I already have.

And, for the record, when I say cutting edge, I am not claiming some of this hasn’t been done, rather, it’s when you start to put it all together that it turns into a powerhouse that is a joy to use.

The real question is what to do if the rec/dub gate is high when you hit arm. With a simple switch, it would start recording immediately. If you need it to wait until the gate goes low and then high again that’s a bit more complex. Let me know what you need.

If I understand you correctly, this is why I have been converting the steady open gate to a 10ms pulse? My sense is that that can become a limiting can of worms, if the approach is to direct wire the clock, because then one might lose the advantage of deciding when to initiate the segment of recording since the master clock begins all segments at the start and closes those gates according to the bar duration. With the counter, I can start a 16 bar loop, 4 bars in. Again, if I am correct, the purpose of the bar toggle gates was to link up to the mixer with mutes.

Funny, there is also some fine tuning to be done there, as I think sometimes a kick drum may not get muted fast enough. Sorry I am not a programmer. But, to me, I am fairly astonished with all the work here. The achievement of Audulus 3 is hard to explain, unless one has integrated it all into a practice of creative ritual. Ideally, someone could do it all. Realistically, it seems like the forum — the unfolding collaboration and assistance is a medicine in its own right, maybe more interesting than the notion of absolute competence.