Really enjoying the technical side to this. Lots of ideas. Lots of this we can do in Audulus. Super underrated possibilities.

I was looking at some of the guitar (or whatever instrument) patches earlier and got myself confused. So I have decided to wipe the board clean, so to speak, and begin fresh. As I have said before, the possibilities here are mind blowing. I would argue even more expansive than Blooper.

The signal then passes through something like a divided digital delay. So you can set the beats per minute on the master clock, then set the delay divisions to your taste.

Next, the signal passes through another delay module that is actually set up to capture loops per bar, which can also be adjusted. If you set the feedback dial all the way to the right, you will get an infinite repeat. So this is where you can freeze your loop, but also but turning the dial back you can get it to fade away or erase is completely.

Finally, there is a bit of reverb on the end.

There will be a series of patches to follow, each getting more complex as we go. Feel free to ask any questions or post your own variations here by adding different tools to the signal chain. Enjoy, and don’t forget to run the clock. 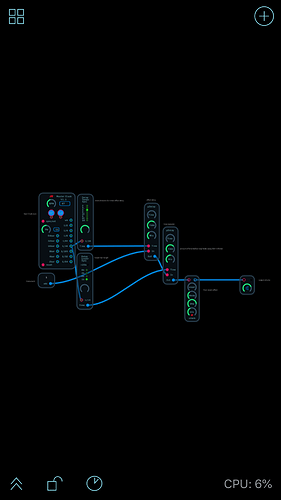 In the vein of simplicity, I want to convince you that Audulus is your new world for effects.

With some of the modules, the dials have been named “decay,” or “size.” But these are labels for the parametric outcomes of deep mathematical relationships. Typically, when you buy a Eurorack module or a guitar pedal, quite often the creators mask the parameters for the end consumer. Here at Audulus we are not selling anything so the labels are more approximate. This means you will need to tinker and tweak until you hit your sweet spots.

There is also a wave folder attached to the mixer. You can adjust the distortion by increasing the “colour.” Because we are working in a modular environment, we have the power to mix signals and choose the order in the chain. This means one can phase dry into the wash effect from a non-distorted source, but then add the folded signal in a non-linear way.

The purpose of this patch is to provide a simple example of an ambient wash effect. Enjoy. 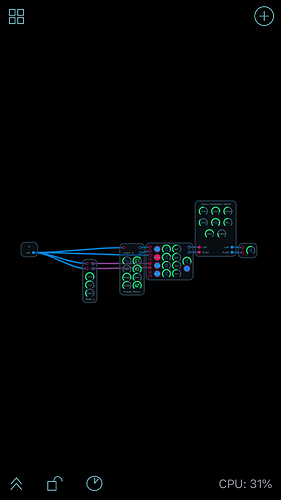 I have been sort of hacking my way around this looper approach for a while, where I wasn’t trying to build a great tool but just finding workarounds so I could get a little track done in a day.

When I use the clock synced delay wired to the bar loop tool, I would often record something and then disconnect the inputs.

Dumb question #1: how to I build a simple latched gate (is that the right term)?

If you scroll up to the post where the gentleman named Knobs starts to unfold how Blooper was designed, I think it will make sense in conceptualizing the direction I would like to go in the thread.

Basically I want the tools similar to the Simple Looper that @stschoen posted, broken out so that we can start to make custom looper patches. By the way, please fix the download on this module post, there is an error.

Maybe there could be a suite of looper tools?

Also, the reverse delay is really awesome, but I wish it could be standardized in the same fashion as the delay syncing approach from the Reface library so that I can get the same tight clock syncing. Is this possible?

Thanks for the heads-up regarding the Looper post. It’s fixed. The simplest approach to a switched input is a crossfade node with a trigger attached to the “c” input. Set the trigger to toggle mode. When the trigger is high, input b will be connected to the output and when the trigger is low, input “a” is connected. In your case, connect your input to “a” and the output to the delay. When you switch the toggle on, your input will be disconnected. Of course you can group the Trigger and Crossfade if you like. 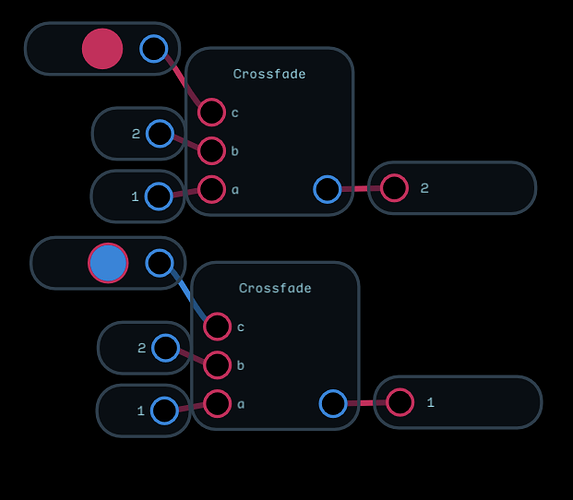 I’ll take a look at syncing the reverse delay. I’ll have to see how @biminiroad approached it. 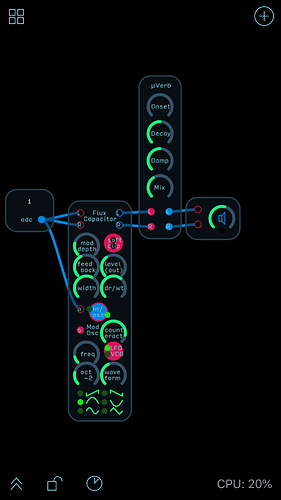 Lot’s of potential with the Flux Capacitor module!

(I was just playing with the gain staging on my Apogee Jam interface, the volume on an iPad, the level out on the module, and the output volume. It seems like getting a lot of this right on “guitar pedal patches” is important. I highly suggest lots of adjusting in Audulus; headphones vs. speakers will make a difference, wet/dry levels. I think we are all used to having things mastered but I would treat most Audulus patches like a guitar and amp where you are always trying to dial the tones in, especially with other people’s patches.)

The real challenge is metering. Ideally you want the level into Audulus at about -6 dB or so for the peaks. Unfortunately Audulus is a bit lacking in the metering department. I build some VU meters but they’re a bit of a hack. They might help anyway
uVU meter mono V1.1.audulus (12.7 KB)
uVU meter stereo V1.1.audulus (24.2 KB)

I am just going to go ahead and keep moving simple, mainly because I want to figure out the best way to use Audulus in a looping scenario — trying to work from strengths and see what could be considered. As more modules get hooked together, particular workflow challenges arise. Here are a few:

I think that it is really nice to have very few features baked in, but lots of availability for adding them as needed. So I like how the clocking is all being done in the patch below. At the same time, while the way the rec/play/dub button on the looper module works is very clever, when I use the gate input from the clock for a count in style transport, it ends up then switching back again. (It will make sense when you see the patch). I feel like there are several possible solutions here but I am wondering which way you might approach it. I am wondering if there should be a “one shot” feature with a count selector baked in, or should I just put a one-shot gate between the bar gate from the clock and the gate input on the Rec button? 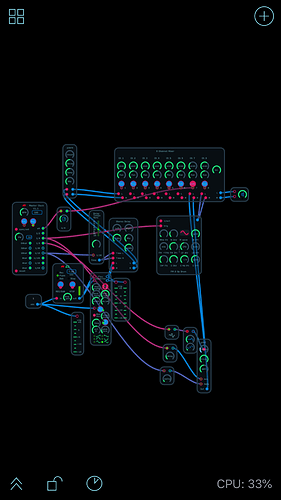 Also, any thoughts on the audible pitching when the delay time sync knob is shifted among the division parameters? It would be nice to get a clean snap.

I’m not sure exactly how you would like it to work. I chose the record/play/dub since it was similar to a hardware looper pedal but it could certainly be changed. The pitch shift when changing delay times is pretty difficult to get around. In fact it was the biggest challenge in building the looper.

I really like what you did. I think it is a matter of plugging in a guitar and trying the patch out. My challenge is a very simple and could probably be augmented with tools/modules we already have.

Syncing is really important. It’s important in the sense of wanting to get a loop to start when the clock starts but then also play back in the next measure. I mean it’s damn close and exciting as hell. 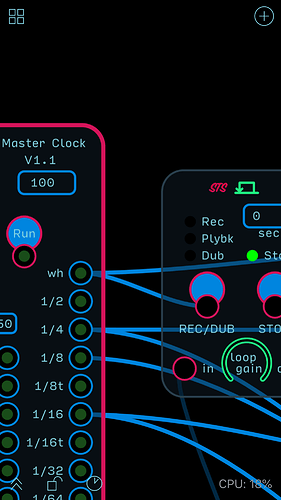 image1125×2001 341 KB
But then I also realize that one would probably want to get that to flip over to play back. It’s not easy to describe. But functionally, what I have done in the past is physically disconnect the clock output from the looper input before it cycles again to stop it from unwantingly flipping between modes.

Is there such thing as a 2-shot?

I think in a looper pedal you can put it in a mode where the Rec/play/dub button simply quantizes to the measure, so you can hit the button within so many seconds before it starts dubbing again, but it will delay that gate until the perfect moment when it actually does.

I believe the Jam man and the boss loopers do this. Why does all this matter? I can produce whole tracks in audulus without using a daw at all. I think that makes your looper entirely unique in the industry. How’s that?

What about a separate tool that allows a person to create a count in for the looper between itself and the clock, but also set the loop length by utilizing the master clock bar gate outputs?

Just thinking further, one issue with a count between the clock and the Rec/dub on the looper is it would put the looper 4 or 8 beats out of alignment with the clock measures. Alternatively, you could put a count in ahead of the clock and looper hooked up the start and Rec buttons, respectively. Again it may just be a matter of trying it in the patch above to see what I mean.

With a counter you could have a clock out on at any specific beat. So maybe the first pulse at say 4 beats the the second 16 later etc. I’ll put something together with say 4 outputs. Let me give it some thought.

This technique has been shared before. I find in Audulus one needs to tweak a lot to get the sweet spots, so it might need to be adjusted for you setup. It’s @stschoen’s Audio Gate controlling a VCA with an envelope. This gives that pad-like effect where you have a slow rise attack. 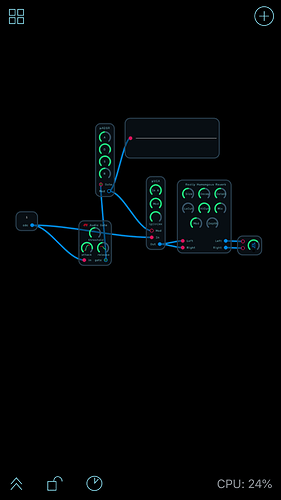 Episode 2? “Not only can you save your loops but you can save the whole layer stack.” 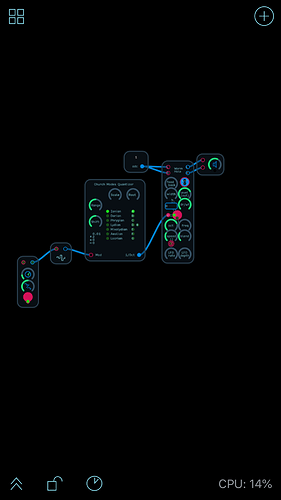 Here’s a multi-trigger you might find useful. It counts the incoming clock and gates it through on the count selected. There are 4 outputs each of which can be set to 1, 4, 8 … 64 counts in multiples of 4. The counter doesn’t loop. Clock and reset inputs and 4 trigger outputs. Let me know if there are any modifications you might need. 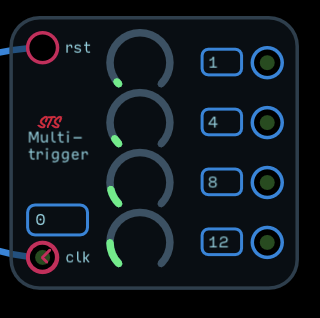 @J031 has officially tipped the scale. By eliminating some pesky clicks, IMO, he has managed to provide a module so wonderful I think Audulus may be the front runner

Again keeping it simple to expose the large possibilities with very few connections. Plug something in, even just speak into your device. 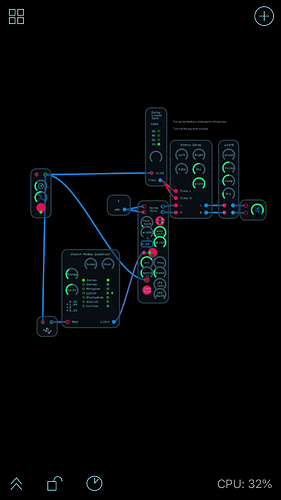 In the patch, feedback is turn all the way down, because I get a static crunch from my audio interface when I open a patch. This way the jolt doesn’t get caught as an infinite loop. So crank the feedback all the way to initiated once you are in there.

As I have said before, the possibilities here are mind blowing. I would argue even more expansive than Blooper.

I am just discovering this myself with my new rack with the couple modules I put in it, the MOTU m4, and the Indio (Telecaster style) guitar I bought on sale from Monoprice. I am so glad that I listened to the advice of my peers here, and stuck with the bare minimum, rather than blowing my whole savings account for a bunch of stuff I now have the knowledge to explore and create with.

The only thing left which I may buy is the EuroBuro module for my rack from Empress when that comes out officially for everyone. That thing is beyond sick, but that is down the line and really a whole other discussion.

My point being that you are absolutely right, and if people have access to a computer or iPad/iPhone can save like $10,000 over buying the hardware versions of what we build to use case all the time. Some of the stuff just can’t even be done with hardware, and vice versa, but I think the favor swings far more toward A3/A4 coming vs. hardware everything.