Well it isn’t so much the distortion flavour as it is the very idea of the analog heat. Distortion with compression, which gives an over grove and flavour to a mix. Useful also if you are, say, playing 10 tracks out but you want your set to have a cohesive dust sprinkled on it.

There are a lot of possibilities here. I was also just thinking of a Korg Gadget/Audulus module that is all set up to recieve MIDI from Gadget’s sequencers. So you could have a ready 808/909 style drum host, but then just link up gadget’s piano roll with Taipei and you would have a multi channel Audulus MIDI drum setup – or whatever.

I have just been hacking away at the Audulus Taipei combo and making some headway but having some sync issues.

I JUST finished this module 2 minutes ago, mind you, before I read that you were looking for a seq that could be used for drums. I think this module I built would be a perfect fit for that which you mention. Hz being good for different analog drum sounds, and the option for the Hz value held in the seq to be transformed to 1/o being good for the oscillators that expect that input. At least I hope it will be useful. I built it for my Volca Audular patch (which needs to be fixed to be better; this was one of the first pieces I was re-doing) so this was sorta built with an additive purpose in mind. Lemme know what you think!

Edit: slight alteration made to the module, as it is not clock driven, the gate input is there for the input of the Hz values, as that is what the S&H is expecting in order to sample the new value. See below example included.

Yeah I was working with @stschoen on that. He has a midi breakout thing I was going to try and adapt to general midi drum trigger outs. The downside to the workflow is you have to work out your beat on a drum machine gadget then cut and paste it to the midi gadget. The upside is you can use gadget’s generative rhythm generators. 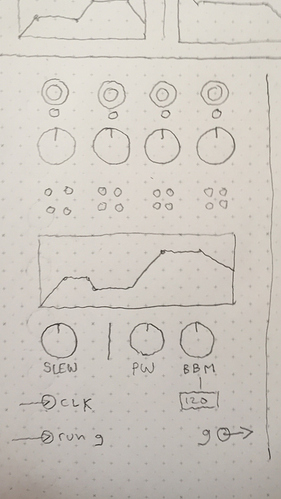 Ok, so here is the fixed one with correct description/explanation in the heading, a demo with all components necessary to use the seq, and an 808 patch I cooked up during a sound design class a few months ago.

Yeah I was working with @stschoen on that. 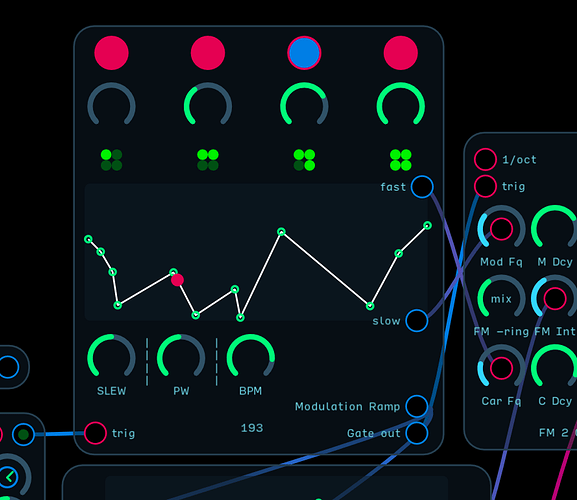 Splines are much wider than I imagined during the sketching phase. Since this uses a rising ramp to sequence the steps, it’s not a big problem to expand this to 8 steps. Also I think I’ll remove the built-in spline, because it’s clear you can use a bunch of those and still need a few more.

I have this sitting on my desk. Looking forward to trying it out.

Here’s a prototype of an 8-step version: 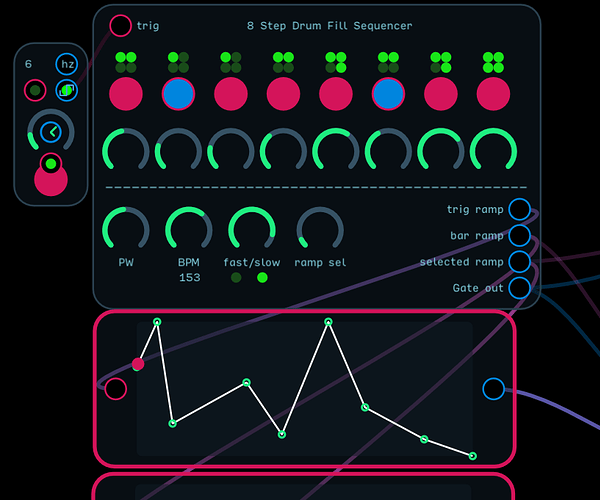 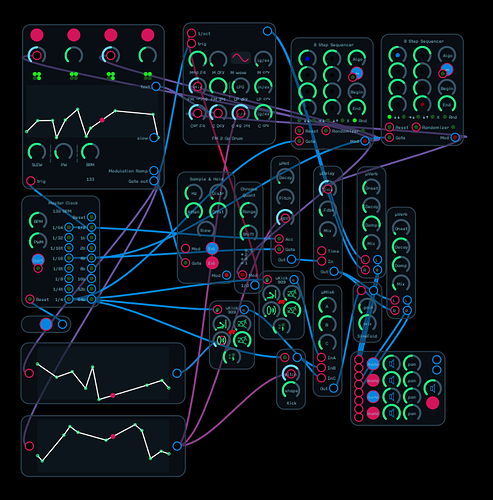 Outstanding! What a clever idea.

I think keeping the ramps external is a good idea. Makes the design more flexible. It took me a while to figure out how the controls interact.

Here is an example where I have self-patched the Drum Fill Sequencer to modulate the BPM for movement. 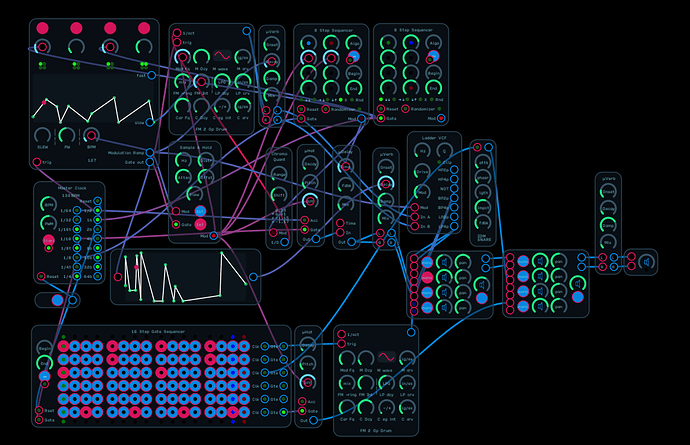 I was having an issue getting the red dot to travel along the spline. What is the ideal signal that that trigger input needs? 16th notes seem to give me issues. How does it compare to the “automation lane” module?

A node I want to build at some point is an extensible sequencer where each element is a knob and you have somewhere between 4-8 tracks of outputs. And my dream is to have this be a 4x16 grid with an ability to chain multiple together to make a 4x16, 4x32, or 4x64 chain of knobs.

I really want the ability to build a drum sequence where I can control a “craziness” parameter that will adjust how often the various elements fire. The idea being that whenever an element’s value is less than the “craziness” it fires, so that you can have a rhythm that dynamically adjusts from a simple 4/4 beat to one that has crazy off-beats.

Check out this module:

[35%20PM] Variable Step Chainable Sequencers This is a reface of the sequencer family I built for the uModule collection. There are three types of sequencers included. A set with fixed gates, a set with external inputs for the sequencer values and a set with variable gate output. The original unit had toggles to switch the gate for each step on or off, but @biminiroad’s unit with variable gate heights seemed like a better solution. Each set has a master and slave module. The master can be us…

If it isn’t exactly what you are looking for, it definitely has a great template for how to chain sequences.

The idea being that whenever an element’s value is less than the “craziness” it fires, so that you can have a rhythm that dynamically adjusts from a simple 4/4 beat to one that has crazy off-beats.

This is definitely doable with available modules. Mostly I just remember this basic set-up: 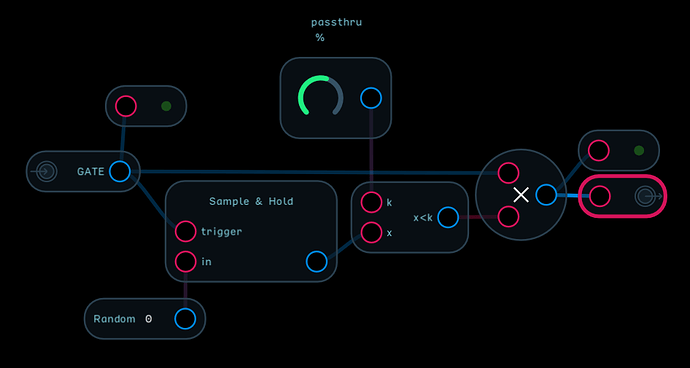 One strategy you could potentially adopt is combining the channels into a single value. I used this approach in several modules. Audulus will support integers up to 19 bits. They’re handled internally as 32 bit floats, but in my testing I’ve found that 19 bits is pretty reliable. If you can live with 4 bits per channel you can mux 4 channels into a single value. The primary application for the external input variant of the chain-able sequencer module @robertsyrett refers to is sequencing chords using a similar approach.

[27%20AM] uChord The uChord is a one to four note chord generator. It takes a decimal number as input and generates a one to four note chord and inversion based on the value of the number. The chord note values are output as a quad signal and a quad gate output that reflects which notes are currently active. There is also an output of the number of notes in the current chord which can be used to adjust the chord’s volume. The notes in the chord, the inversion and the number of notes are display…

Of course you could also simply replicate the sequencer logic for as many channels as you would like. Feel free to use anything I’ve put together. Having worked on chain-able sequencers in Audulus for a couple of years, the biggest issues I’ve encountered are timing related. Because nothing in Audulus actually happens simultaneously, and you can’t control the order of execution, it’s often difficult to get things to occur in the necessary sequence. You might find this collection of counters and such useful.

Assorted Logic Modules This is a collection of some of the basic logic elements I’ve developed. Most are the result of a quest that @robertsyrett and I embarked on to find the perfect reset. It eventually led to a resettable S&H node that could be reset even when the trigger was held high. With this as a building block, I developed a variety of counters, flip-flops etc. I broke them out into various categories and I’ve included brief text descriptions of each module. Most have been pretty well d…

I think you missed my question above, @robertsyrett. I was trying to clarify the trigger input on the drum fill sequencer. My red dot won’t progress along the spline.

What is the ideal signal that that trigger input needs?

Just a simple short gate. This is a triggered event that produces one bar of gate output, so I envisioned it being triggered once every 4 bars or something. Here the BPM is being modulated, which changes where the sequencer is in the timeline causing the red dot to jump around discontinuously, i think. Sounds interesting. Maybe it could be turned into a feature somehow.

How does it compare to the “automation lane” module?

The spline shape on the drum fill generator is also an envelope shape for the “fast” output. But the “slow” output should behave the same when not heavily modulating the BPM.

I think you missed my question above

Sorry about that. Things have been pretty crazy lately. 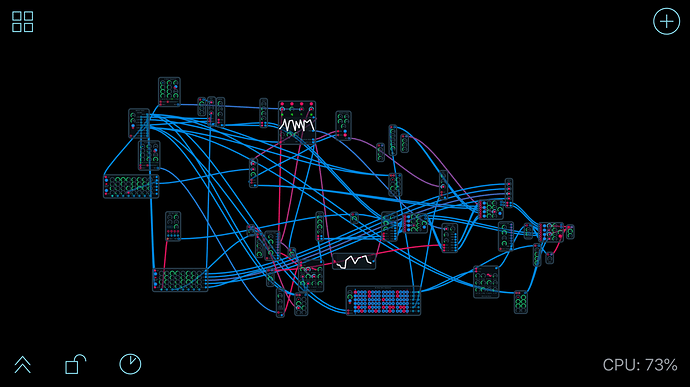 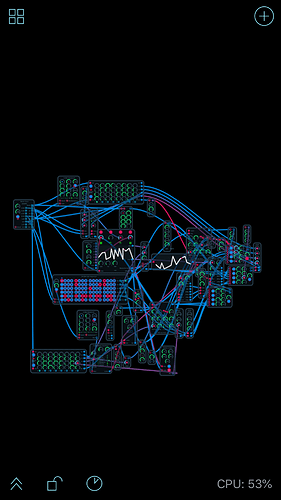