So to make the upcoming AUv3 release the most amazing thing ever, we’re looking for Audulus audio effect modules that we can include in the standard module library with the release.

Submit your modules below for consideration to add to the library!

We need your best phasers, delays, choppers, stoppers, and more!

AUv3 MIDI Out will come on the heels of AUv3 Audio, so watch out for that!

It’s actually an older module. I just posted it because I thought it might be useful for a multi band distortion patch that @murmichel wants to build

@RudigerMeyer’s frequency shifter work is fantastic. I also really like his documentation.

I find with Audulus what I am so drawn to is the deeply subtle considerations of synthesis, which would really appeal to the seasoned practitioners like Richard Devine – sometimes I wonder if he is kicking around here under a pseudonym, as I see he is quoted on the product website and, to be quite honest, was the straw that got me to purchase the app.

I wish @stschoen would do some videos or someone would do some on his designs, because everything he is making is exciting, but I feel like I am not properly appreciating the full versatility of his creations.

The idea of drawing curves for modulation would be very unique and would make Audulus a tool for all Auv3 effects, as you would be able to route the modulations. So developing the gui for the spline node and figuring out curves could bring a gate effect to full fruition; even if it is just a matter of adding points and pulling the lines around.

I would also like to see a combined spline and mapper node. The mapper gives you a single curve and the spline gives you a multi-segment linear map. It would be great if each segment in the spline were a Bezier curve rather than linear. Not only would it make mapping more flexible, but scanned at audio rates, it would make a pretty reasonable wavetable.

I’m not really set up to do videos at the moment, but I’m very flattered that you think it would be worthwhile. I may have to see if I can put something together. What would you be most interested in?

I think that’s a definite add somewhere in the future.

Not to derail this good feature add discush but this thread is more for effects that can be built with what’s here already that we can be like “Blam! Get Audulus and get all THIS with it!”

I feel like effects have been one of the more neglected genres of modules people have contributed so far.

Good point! Maybe we should move these to another thread

I will go through my effects bin and post a zip on this thread. 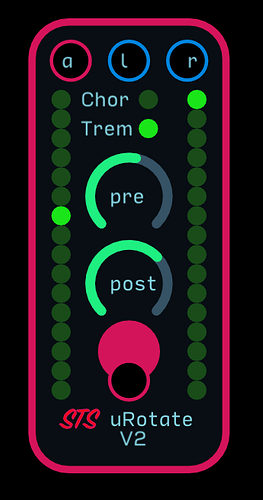 I have some comments I would like to make but I do not want to clutter up the thread. Could you start a new thread and maybe we could curate the good stuff here over to there or some other solution?

I’m not really set up to do videos at the moment, but I’m very flattered that you think it would be worthwhile. I may have to see if I can put something together. What would you be most interested in?

Well as I read, you are recovering from surgery so there is no rush. However, some of the quantization stuff you have worked on interests me. The 24 Scale Quantizer stands out for sure. I was on the Ornament and Crime website and I have been watching some videos to try to make sense of how it is used creatively. Keeping this in mind as an example, I think that one approach would be to outline your understanding of what inspires you to build a particular module (if you are modelling Eurorack then just explaining the features you are trying to capture) and maybe moving on to an example of how you implement the module in a patch. It seems like knowing how to operate these larger modules leads to knowing how to run the minimal uModules. You may also want to just focus on particular subject areas like “sequencing” or “matrix mixing” or whatever. And if you feel that things are too novice, you can always sprinkle in some pro tips or questions of your own for other heads to comment on.

It’s funny though – to me it seems like learning this stuff is both simple and hard like a puzzle. But when I know how to use something I find it very remarkable.

@biminiroad I promise I will keep quiet on the thread here and let you guys drop some AUv3 effect prospects.