I do believe that band limiting is what’s needed to reduce aliasing rather than over-sampling. However I suppose the two concepts might be related. Aliasing is charming and all, but I understand the preference people have for avoiding it.

Yeah what you do is you oversample the signal and then bandlimit it - if you don’t then bandlimiting alone won’t get rid of the aliasing since it would already be present (at least that’s my understanding of it).

Here’s an example starter system of simple modules. What does everyone think about using more faders instead of knobs? I feel like in a lot of situations faders work better. 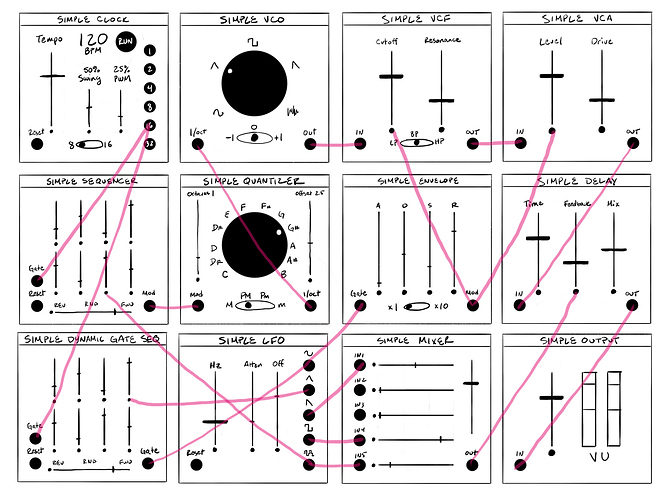 Another brainstorm I had - you could be able to snap modules together to build a larger patch that has normalized connections. In this example I have just small square modules, but you’d be able to snap together whatever sizes you want.

Also had an idea of chaining inputs together like you see in 1/oct signal and gate so you don’t need to wire up multiple external signals to a single synth. 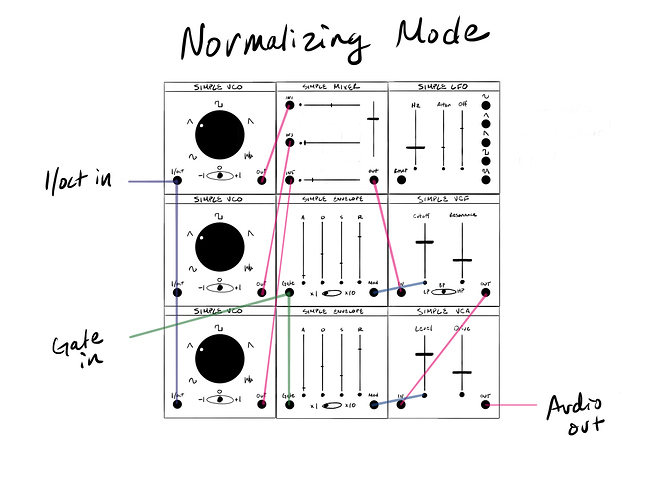 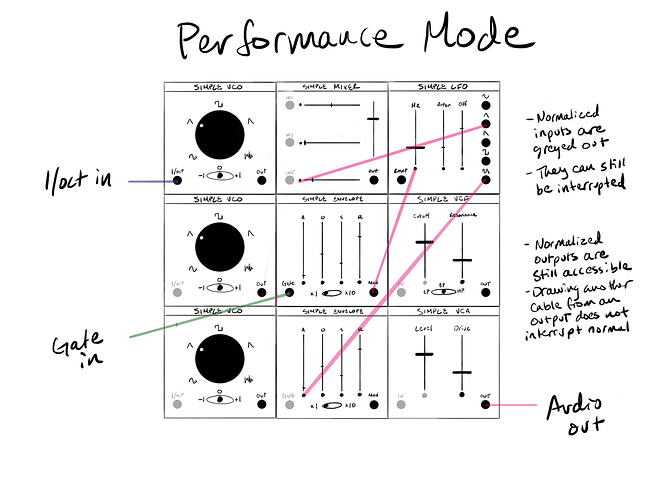 Here’s a possibly way the rotary switch node could work. The screen at the bottom is a contextual menu that pops up when you select the node, You can add text or graphics from there. 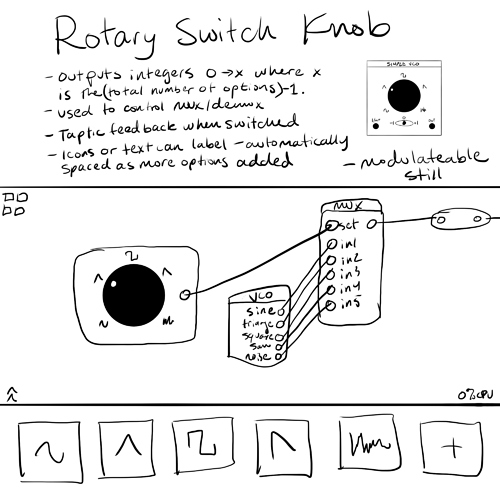 Another idea for new nodes for Audulus 4:

One of the problems with Audulus 3 UI nodes (knobs, meters, buttons) is that there is only one size for each node. Sizing is a great way to show a kind of informational heirarchy.

This module by Koma Electronics is a perfect example of sizing. The only controls on this module are knobs, but the knobs are different sizes. This is partly a way to keep module size smaller while maintaining a lot of funcitons, but the module itself is also ranking the most musically useful controls to performance - the first being cutoff, the next being resonance, and finally the attenuators for input and CV.

I suggest in Audulus 4 we follow a similar system.

Each UI control element should have 2-3 sizes to choose from. They also should be options to choose rather than a kind of free resizing. The reason for this is mostly that it is easier for Taylor to just offer an option of 3 sizes for each node rather than building a UI for free resizing.

I suggest that when you tap on a node inside a subpatch you be given a context menu that offers the opportunity to select “Primary, Secondary, or Trim.”

I also suggest that inputs for modulating nodes directly, like the faders you see in the modules above, be smaller than module inputs and outputs.

In Eurorack, all I/O has to be the same size because they all use a standard 1/4" patch cable. It’s not always super obvious which are the “most important” jacks on a module - meaning the ones you have to have plugged in or out of to make the module work.

We’re not limited by this in Audulus, however, and making secondary inputs like those that would modulate a fader or a knob smaller is a great way to “focus” the module.

Small thing, but a thing: I’d like more control over how digits are displayed in modules. Currently I make a layout that looks balanced and nice until you roll the value to a whole number. 0.99 (truncated) becomes 1 and not 1.00. And 0.55 becomes 0.5 and not 0.50. When those numbers are all centered in a layout, or in some sort of box, they become uncentered when you loose those digits.

And I’d like sliders over knobs for most things. Adding a dead zone feature would be sick. Like for a tempo slider have an (optional) small indexed dead zone for center or 0. Similar to some Technics 1200 pitch sliders. 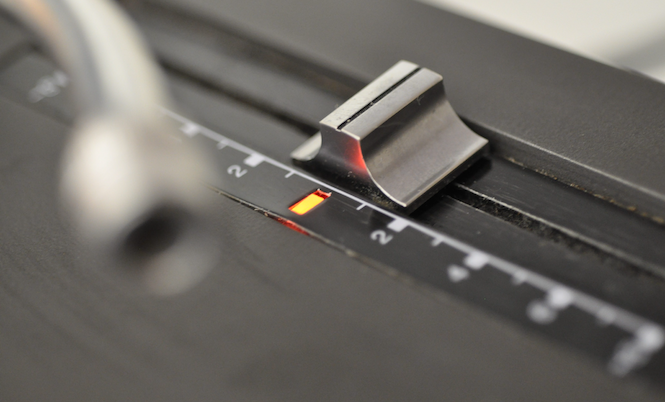 Small thing, but a thing: I’d like more control over how digits are displayed in modules.

Adding a dead zone feature would be sick. Like for a tempo slider have an (optional) small indexed dead zone for center or 0.

Also good idea - I already thought we needed some self-centering knobs, but faders of course would be prime for this too.

Does new iPad Pro have haptic feedback? I think that would be really useful for feeling connections (a “click” when a wire is attached), feeling knob/fader centers, pushing buttons etc. I know it wouldn’t be centered directly under where you finger is, but it could still be a cool option.

Also good idea - I already thought we needed some self-centering knobs, but faders of course would be prime for this too.

You can use splines for dead zones, of course it would be nice if Audulus 4 splines allowed for precise control over where points get placed.

You can use splines for dead zones, of course it would be nice if Audulus 4 splines allowed for precise control over where points get placed.

No the ladder topology can produce any types of filters, see the multimode moog ladder I posted a while ago (but that was discarded from the library, as well as the SEM multimode).

It wasn’t discarded! Just not added

There’s a ton of stuff that’s in the backlog that I’ll be getting to.

OK good. I see a lot a good stuff here, like the performance mode (can you explain a little bit what are your plans?), the clean design of the modules, knob sizes, etc…

see the multimode moog ladder I posted a while ago

Just to chime in…I use @SansNom’s modules quite often and they kick ass. Hands down my favourite EG.

Also, I would like to see the curating improved. I often feel guilty because there is so much great work being done/or that has been done, and I don’t have time when someone posts something. Then when I do have time, I find 9 times out of 10 I’ll just use what is bundled in Audulus because I don’t have a palette of modules ready at hand. Bad workflow for me. I understand that some people are great at organizing their libraries, but I am not. So if Audulus had an organization system that made it extremely convenient to choose the best/most interesting filters, EG’s, Osc’s, etc., the quality of what I work on would increase drastically. I mentioned Reaktor in this respect about a year ago. While the new forum is a major bonus, most of the archiving challenges were not remedied by Discourse, IMO.

Although boring, it might be a good topic for a video. Everyone getting their libraries nice and tight.

It would be really important for me to still have low-level DSP capabilities like at least the biquad filter. I didn’t see it in your filters list, @biminiroad .

Oh I took those for granted since there’d still be a BiQuad node.

That’s what I thought but I was just checking

In a way knobs in Audulus are already like faders since one “turns” them by making a vertical or horizontal movement, and I’ve always thought that in a way the knob UI is quite practical since one can place quite a lot within a small space. Looking at your diagrams though it seems that the fader UI would be quite compact. Will it be possible to adjust the size?

What about multitouch – is that still on the cards for Audulus 4? Also, one of the aspects of that I quite enjoy about the Korg ARP ODYSSEi app is the way in which it’s possible to swipe your fingers across a number of adjacent faders and set their values – that kind of thing can be very useful for quickly adjusting something like an equalizer curve, for example.

That would be as huge an improvement as Midi out.