The Decimal gate/pattern sequencer is actually pretty old. I think @biminiroad actually used it as the basis for his gate pattern bank module. I realized that I could use the same system that @stschoen was using for his quantizer to make a gate sequencer that just covered every possible combination of 16 gates. Shortly after that I realized I could use his design for the Audulus Turing machine to also have it output a sequence. It’s really nice when I want to make a sequence of sequences, although it still acts strangely sometimes.

I keep meaning to post this. It was up at the old forum. It’s a bit tricky to use unless you know how the insides work, since the best way to make the most of it is to change the internal patching.

Includes some new sequencers and utilities! Check it out 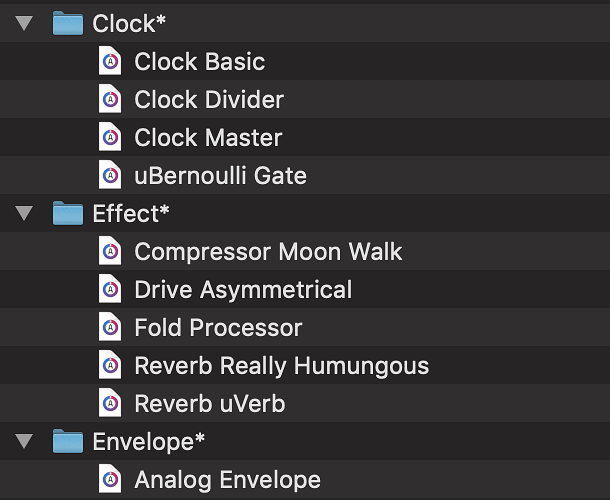 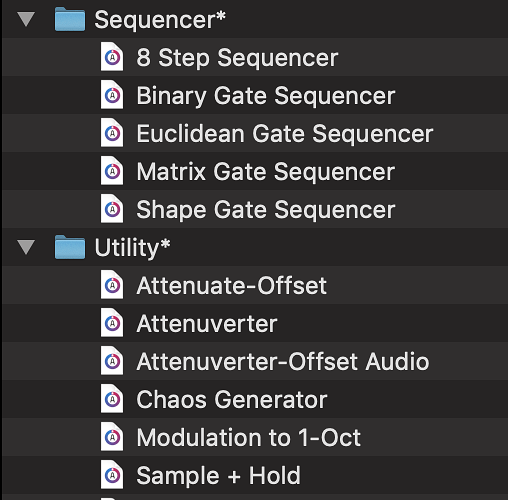 If you look to the Binary Gate Sequencer, I made what @robertsyrett did with the 16 gate sequencer but broke it up into 4 rows so it’s easier to dial in a particular rhythm. It also gives you an option of a gate output that will go low only during the off periods - useful for creating long vs. short notes instead of just rhythms of the same gate length.

@kin.sventa the above reminds me of some of the stuff you’ve been doing lately 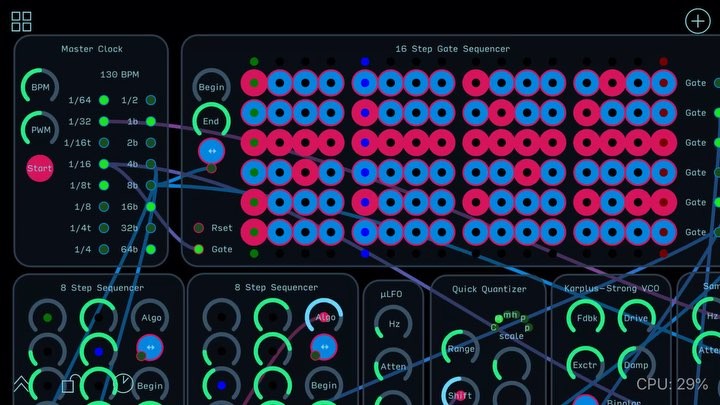 What you did with the drums is super inspiring. Also, the reface work clearly brings everything around again. With the delay of A4 its nice to see this stuff organized. I have so much to learn that I am not that concerned about the delay. I have to go back through @RudigerMeyer’s articles and try to catch up with @stschoen’s modules.

Kind of too bad for people who were worried about buying 3 only to then buy 4 and so they have held off. My impression is that it will probably take a year to get 4 up to where 3 is now. Have you ever considered porting a module over to VCV Rack just for fun – for the advertising?

Glad you like the drums! They were fun to program.

This is almost like a stepping stone to Audulus 4 - redoing these modules in 4 will not take much but some rearranging and taking advantage of some new nodes and functionality. The core of the modules will likely remain the same though, so it won’t take a year to finish Audulus 4.

And no I can’t really write any code myself so I wouldn’t know where to start creating an Audulus module in VCV.

Here’s one I came up with thinking about the drums from the previous patch.

You plug in 4 gates A-B-C-D and can set the probability of each to be picked when the Gate input is pinged. The outputs include a steady stream of gates (bottom) and one that only lets the gate through as long as the incoming gate is high (top).

Probably going to change the name, but it’s a pretty useful module. Instead of feeding 16th notes into this gate sequencer, I can feed it 8th notes and virtually expand the pattern to “32” steps while maintaining complexity.

Probably going to change the name

I would agree. It’s a need module, but it’s more of a probabilistic gate selector. With a name like gate distributor I would expect it to send gates to multiple sources. Also, is there any reason you couldn’t use this module to route pitch signals?

This is so sick dude. Awsome, thanks so much!

Also, is there any reason you couldn’t use this module to route pitch signals?

Not at all - didn’t think about that! I’ll try to think up a new name that’s more inclusive.

I made a more fully-featured automation lane module too. You can chain them together if you turn down the bars knob and have only one 1/16th gate input. The reset also will reset all of them at once. I’ll personally use this most often for doing volume automation, but it can be for anything really. There’s a loop function so you could do something that happens every 4 bars or whatnot.

Here’s a uKick drum. Very straightforward, but with some nice control.

Also, accented notes have a click on them (like the x0x-type drums), so they stand out a little more.

Check inside - I wanted to grab only a few samples of the noise, so I used feed-forward z-1 nodes to create a 128-sample noise buffer, which is roughly half the time of a 1-frame delay, which it is built on.

There are a couple of internal trim controls - one is for click volume and another is for tone. As the drum decays, it fades from a distorted dirty sine to a clean sine - you can use the trim pot to change the shape of the envelope that is causing the shift.

Since it’s a uModule, I just wanted to have it be the bare minimum controls, so I opted for pitch, decay, and accent.

Excellent. I like the decay on it. Nice to see the basic stuff get tightened up. I was trying to beef up the kick by running two of them before.

I am not sure if I am doing something wrong but I can’t hear any audible difference when I turn the accent knob.

You have to use two lanes of the gate sequencer for gate and accent - if the accent lane isn’t over a gate, you won’t hear anything. The accent just modifies where the loud kicks are. So plug in a basic kick beat on the top lane then put accents beneath the notes you want to stand out. Make sense?

If you look at the video I posted near the end I’m changing the accents at the end of the pattern - that should make it clear.

You have to use two lanes of the gate sequencer for gate and accent - if the accent lane isn’t over a gate, you won’t hear anything. The accent just modifies where the loud kicks are

I think the sequencer is going so fast you think it’s being triggered on the blue (off) steps, but it’s not. They’re only triggered during the on steps. The gate will trigger the sound of the kick and if the accent gate hits at the same time it will be a louder.

Below is an example of the delay sync module working with a stereo delay. The stereo delay also has a width control so the delays don’t have to be hard-panned, or you can treat it like a mono tapped delay with the width all the way down.

The library is looking pretty good! Although I cry inside when I think about not being able connect patch cords to knobs, I am realizing I use that feature in every musical patch without exception.

Above are a few suggested changes. Some are just suggestions in labeling to improve clarity and others simplify the modules. For example, I think having internal slew on time changes for the delay ended up being pretty frustrating for me. The sound of the slew gets introduced when I don’t want it and percussive timing is tighter without it. Others are just ideas I had and seeing if they might work in the library modules, such as the noise osc.

Loved the patch you posted to instagram also, very squelchy